They’ll either be side by side or facing each other. The whole point in having two stages (like lots of Euro festivals) is so one band can set up and another start in quickly succession. There would b 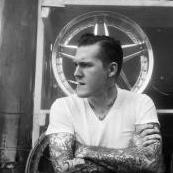