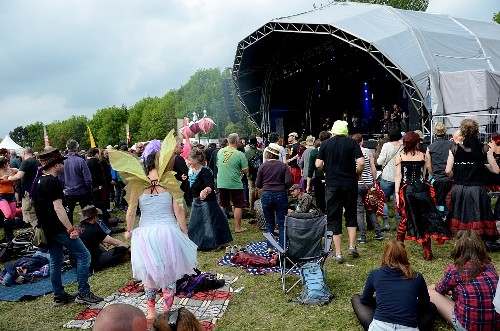 There's something special about getting back out in a green field for the first festival of the season, especially when nature has just sprung back into life. Suddenly everything is green and verdant. Last weekend there were times when the sun shone, the leaves rippled in the breeze, flags fluttered as music drifted across lush green grass and it felt good to dance, and celebrate.

Having been going to festivals for sometime now, I've often asked myself what makes a festival work. This time I ask it having returned from an immensely enjoyable weekend at Bearded Theory. Okay to start off I thought perhaps it wasn't going to work, heavy bank holiday traffic meant it took us a long time to get to the site, and once there we joined long queues for the campervan to be parked. I realised that a large campervan field would need tight controls so that everyone fitted in, and the next day it was apparent that a lot of those here this weekend slept in live-in vehicles. 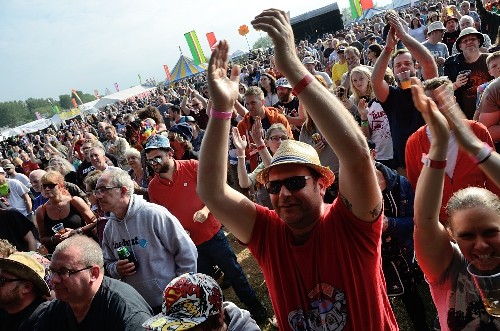 On arrival there were also queues to be wrist banded and a polite queue for the bar. But aside from the difficulty finding water points which weren't signed that was my only bad experience of the whole weekend.

The festival is run mainly by people volunteering to give up their time, and with eight years under their belt, they've clearly, despite moving to a new site last year, got a handle on what festival goers want. There's a good choice of food and it's reasonably priced, with main food around £7 and among the 20 or so eateries are three of my all time favourite caterers offering their tasty cuisine. A decent choice of food is something that keeps festival goers happy, and alongside it is beer averaging £3.50 a pint which also has plenty of choice. In fact Thornbridge who supply the beer are pretty much running their own beer festival, offering around 20 ales either on pump or bottle and going from a session ale all the way up to hefty 10%ers. They also offer a range of guest ciders including Old Rosie so I'm happy. The festival also allows you to take in your own booze, however the three bars are always fairly busy, and by Sunday afternoon l'm told they've shifted 40,000 pints. The bar also had a handy phone recharging point - free to use. 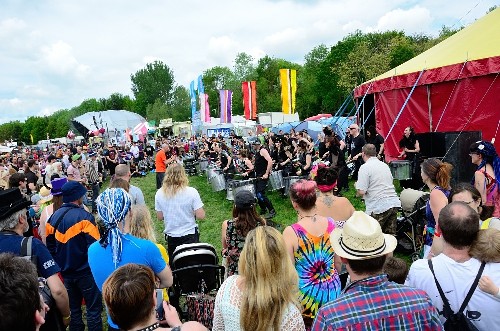 The site itself is compact, and flanked by trees, located on the floodplain of the Trent. Also the site of Bloodstock, Catton Hall has installed drainage under the fields, but the fine weather means it's never tested. Bearded Theory uses pretty much the same template as the bigger festival. There's four main stages all boasting fantastic sound which is a big plus. There are two outdoor stages the main 'Pallet' stage, and the beautiful 'Woodland' stage located in a grove of young oaks. The other two stages, the fantastically decorated 'Magical Sounds' dance tent, and 'Something Else' Big Top are both under cover, and beside the latter is the 'Tea Tent' which also offers intimate gigs.

Toilet facilities are decent with plenty of urinals taking the pressure off the cubicle loos, at times there's queues but the site is so small and easily traversable it's not hard to go elsewhere should you be caught short. There's a decent clean up crew, and enough bins, though I'm not sure about recycling. The festival has a lot of alternative types and smells like Glastonbury used to before the fence. There's a minimal police presence, I don't see a policeman all weekend, though signs let me know they have set up covert tents. There are some beefy security and dogs with handlers, and friendly Oxfam stewards, and no crimes or thefts to report. Although someone lost their tent when it was tatted whilst they were walking their stuff to their car. 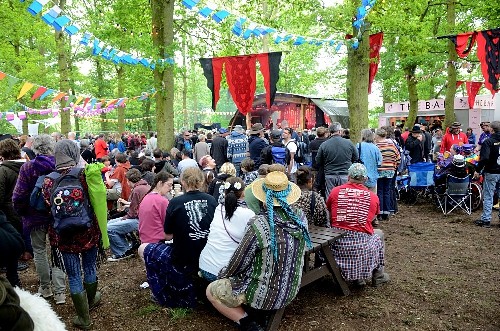 On site there's also a decent number of traders, artisans, site art, flags, and alternative medicine pedlars to make it worth exploring, and a large number of veteran T-shirts to spark interesting conversations with festival goers who've been coming to them for decades. The fun fair is perhaps charging too much to distract kids from the wealth of fun on offer in their field, but it does have a few attractions for adults. As well as one of things which offers you amazing aerial views of the site between bouts of vertigo inducing acceleration, and a big wheel, there's also a chance to challenge your mates to ride a herd of bulls which proves a great way to spill some of the lethal mixes the nearby cocktail bar is selling.

Other distractions include the late night Disco Shed, with cheesy tunes and animations that proves a late night hit long into the wee hours, a few communal firepits, and plenty of picnic tables around the bars to rest upon without needing to bring along a fold up chair,although many do. 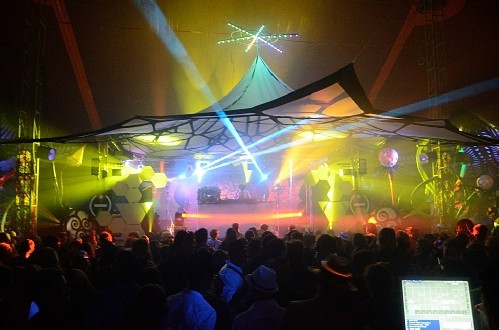 Last time I came to Bearded Theory it was freezing at night, and not much warmer during the day. This year it's much milder short sleeves and shorts are the order of the weekend. I'm still quite amused by the whole beard wearing thing on Sunday, but with a pirate theme too, there's many less beards then the last time I attended.

The organisers clearly go to some length to please their audience, there's a wealth of merchandise on sale, and not just T-shirts. Despite the late licence, people are crawling in at 7am most mornings, it's firmly aimed at families. So much so, that with it being term time, in a festival first, the organisers have set up a school. Teachers are both acts and festival goers and classes are run to the curriculum, so kids can transfer from their own schools to the festival without their parents incurring absence fines. It's a brilliant idea taken up by hundreds of children, who get festival flavoured lessons, while their parents are able to arrive early to enjoy the festival. Every kid I speak to about it, have loved it, and they've genuinely enjoyed learning and engaging in a different environment. A terrific idea.

Of course most people aren't here for the weather, the location, the food and drink, shopping, or the schooling, or the people, for many it's the music that matters. As I've mentioned there's a definite nod to the festival scene with a host of festival favourites going all the way back to Buzzcocks who were on fantastic form, Radical Dance Faction (RDF), New Model Army, Back To The Planet, to newer ones like Pronghorn, Skinny Lister, and British Sea Power (who end with Hawkwind's Silver Machine), being supplemented by heritage acts like Misty in Roots, The Beat and the terrific Neville Staple. Newer festival acts entertain too, like Hobo Jones & The Junkyard Dogs (who fall foul of the curfew on Thursday), Doozer McDooze, The Sweetchunks Band, and The Bar-Steward Sons of Val Doonican, all provide the feel good laughs. 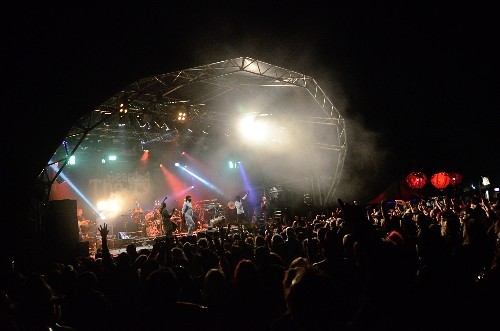 The headliners are all worthy of their top billing James, Afro Celt Sound System, and The Mission all deliver crowd pleasing sets.

It's the beautiful Woodlands setting which has the best new finds for me with Bill Smarme, Jaya the Cat, Pigbag (on recommendation), The Jack Ratts, The Leylines, and Super Fast Girlie Show all proving highlights. Augmented by acts I've seen before like Louise Distras, Misty's Big Adventure, and did I mention a terrific closing set by Neville Staple?

A colourful fancy dress work out with the surprisingly entertaining Mr. Motivator , and an attempt at musicalness with the participative Uke Jam, it was my favourite location of the weekend. 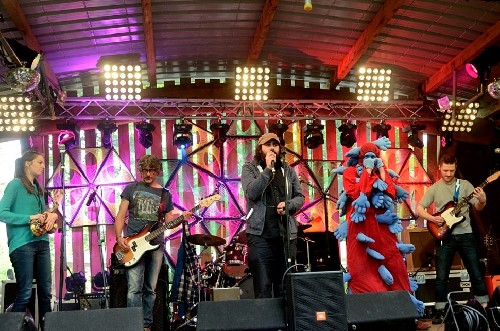 Clearly there's a good eye for detail, a thoughtful consideration of music tailored to old school festival goers, solutions for family needs, decent food and drink at sensible prices, and a beautiful site that go to make Bearded Theory a success. I suspect it takes an awful lot of time and energy to create such an event, and I'd like to thank everyone who helped it all come together. It's clearly a festival travelling in the right direction, I'm guessing there'll be discussions about the arrival and drop off arrangements. Reminded me of early Glastonbury's and that's a good thing.

Unfortunately Glastonbury announced part of their line-up when the eFestivals meet had been planned, so I had to write that up meaning I missed the get together. But I managed to meet a lot of friendly people over the weekend, and it took me nearly an hour to move between stages at one point due to the number of people I knew I bumped into. It was nice to see so many familiar faces I've not seen at festivals for years, and I had a great weekend. I guess it's the company you keep that decides how good a time you have at a festival. It's also how those putting a festival together feel about it that make it work, in this case the volunteers are clearly passionate. They must be knackered, I'm surprised they haven't taken a year out. 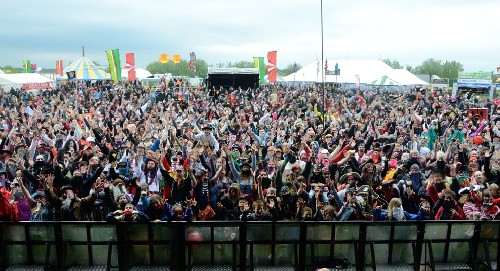