The dates for 2008 are confirmed as Friday 1st until Sunday 3rd August at the site which has four lakes, thick woods and an arboretum at Eastnor Castle in Herefordshire.

Big Chill festival offered to re-home the Sunrise Celebration which got washed out in May. The event which is a mix of the very best in alternative culture, a green ethos and spirit and prides itself on sustainability! Festival goers at big Chill can now also experience this festival for free, getting two festivals for the price of one. anyone with a Sunrise Celebration ticket is also able to experience both festivals. Tickets for 2008 are only valid for entry to both festivals as long as they were exchanged. For information on the new event, and the artists playing in the Sunrise field please click here.

TICKETS HAVE SOLD OUT - phone venue for last remaining tickets.
The prices were:-
Adult: £129.
Student: £110 (with Amnesty International membership, for full-time students only) Teen: £60.
Live-in vehicle: large £80, small £40.
Anyone attending in a live-in vehicle must have bought a campervan ticket. Awnings are allowed and a maximum of 2 tents with each vehicle. Cars are not allowed in this area.
The Big Chill has a limited number of special 'Leonard Cohen' day tickets for Sunday 3rd August priced at £65.

All disabled tickets have sold out and Accessible Camping is full. Live-in vehicle tickets have also now sold out. Car park tickets are no longer available to order online, but will be available on the gate.

Also new for 2008 are 'The Big Warm' with storytelling and song around campfires; the 'Moonlit Picture House', a late night, outdoor cinema with short and feature films; a comedy tent wiuth a line-up of established and up-&-coming comics; 'Words in Motion' is expanding, bringing more poetry and storytelling; A Victorian Fun Fair; and children's playground within the Family campsite to give little'uns a space to play close to home.

This year, also sees The Big Chill creating spaces for even more art, film, comedy and literature at the festival, with their four partners.

The ICA (Institute of Contempoary Arts) offer festival goers a selection of ICA films and specially-curated art and music collaborations.

The BFI present an audio-visual, genre-defying film and music experience in the Media Mix tent including audio-visual collective Exceeda who make a return to The Big Chill with a fresh production and The Light Surgeons.

Underbelly are providing laughs with the 'Underbelly Comedy Area' which houses a new comedy tent.

Festival partners for 2008, Sunrise Celebration, present Astro Heart Share with Jonathan Cainer with the world's largest speed dating event. Big Chillers are invited to take part in the Astro Heart Share by receiving a tailored card to suit their 'astrological element', containing special questions you can ask other people at the festival... and they will have questions on their card for you too.

The famous Camden venue, the Roundhouse, increases the entertainment available by adding performances in the new Roundhouse Big Round Tent, as well as adding a programme of creative projects for 12 - 16 years year olds. These include workshops for aspiring musicians, artist and media producers and will be incorporating film, singing/songwriting and MC-ing. Plus, there's the chance to make special radio broadcasts for Big Chill Radio. For young artists there is also graffiti and photography projects. Note, that under 18's must accompanied by an adult. 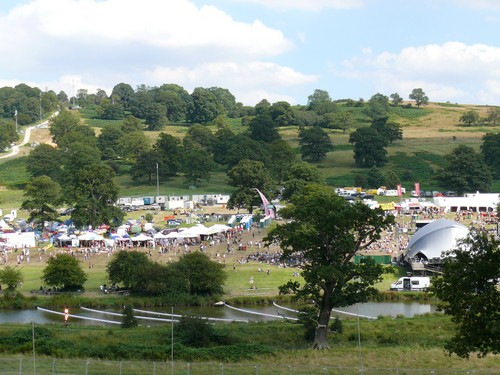