THIS EVENT HAS BEEN CANCELLED.
Big Chill Festival has been cancelled.

A statement from Melvin Benn says:


"It is with a considerable amount of regret that I have decided not to go ahead with The Big Chill in 2012.

I looked long and hard late last year at moving the date so it didn't clash with the Olympics but the mix of the festival fans desire to keep the date and an inability to find an alternative date that works I plumped for maintaining the existing weekend.

Sadly, the artist availability and confirmations we were achieving led me to conclude that I couldn't risk going ahead with the event as an outdoor event this year. Efforts are being made to look to bring a smaller event indoors this year with the anticipation of The Big Chill being back outdoors in 2013.

Set in a picturesque location and offering both families and ravers a diverse range of alternative, dance, electronica, and chilled beats from live bands and DJs. The music programme is a mix of everything from legends to new talent, plus a whole range of musical styles from rock, folk, jazz, African, dub, and unique collaborations. Aside from music the festival also has art, films, poetry, cabaret, visuals, and gourmet food.

The dates are confirmed as from Thursday 2nd until Sunday 5th August at the site which has four lakes, thick woods and an arboretum at Eastnor Castle in Herefordshire.

There are no acts confirmed yet for 2012, the first acts will be released in spring 2012.

The Big Chill offers a highly evolved, all-round experience for 30,000 people including a wide variety of music and performance, art, spaces for kids, comedy, dance and film; technology and its relationship with nature; identifying artists and nurturing their creativity.

There will be a full programme of workshops, performances and creative activity.

The venue is a general campsite that has disabled toilets & showers, please contact Big Chill HQ before the event for more information.

Coach travel can soon be purchased online, with or without combined festival tickets. 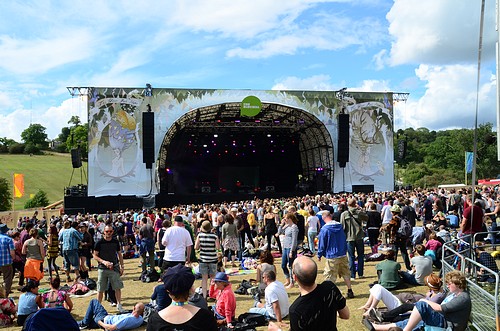