the Greenpeace Ship, Dome, a giant polar bear, and more 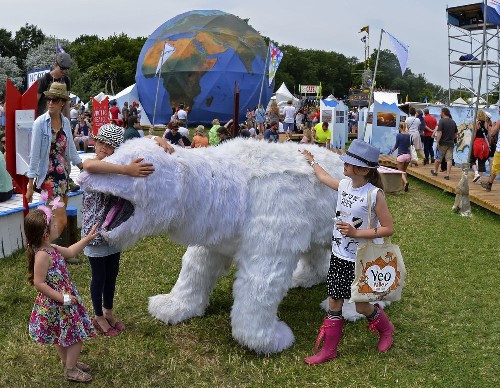 Glastonbury Festival have revealed details of this year's Greenpeace Field, a part of the 60 acre Greenfields Area that is home to the eye catching Greenpeace Ship at the entrance of the field.

A reminder that Greenpeace's ship the ‘Arctic Sunrise’ is still being held hostage in Russia after it was illegally seized by the Russian military, this year as well as a playground it will be a reminder of the real story of the Arctic 30 activists housing an immersive audio installation in the bow. Also built into the boat's structure is the skate ramp, and climbing wall.

At the back of the ship is The Greenpeace stage with daily performances from special guests, plus Emerging Species, New York Jazz Band, Lyrix Organix, Woohoo Revue, Too Many T's, and Perhaps Contraption plus Quincy Bones open mic sessions offering attendees the chance to play at Glastonbury!

This year there will be a new centrepiece the massive  Aurora the giant polar bear! Bigger than a double decker bus with a roar to match. She’s been seen at other Greenpeace campaigns and is a messenger from the Arctic reminding Festival goers that it’s an area under threat like never before. Attendees can hear her stories, and join in with the children’s workshops where everyone is welcome.

All around the field are Greenpeace campaigners who can bring Festival goers up to date with their campaigns like the Arctic, giving the facts about things like fracking, flooding and even what’s behind the climate chaos that threatens us all. They're joined in the field  by Sideways Arts and their walkabout theatre.

Also in the field is The Greenpeace CLiMAX Dome home to the world premiere of David Attenborough’s 3D collection, and the D-fuse Extreme Energy immersive installation plus Addictive TV (AV)'s Orchestra of Samples .

The area is also home to the Greenpeace cafe and the world famous carbon neutral, Greenpeace Hot Showers. Powered by sustainable wood pellet boilers and themed this year as chilly ice caves, they've been a feature of the festival for 20 years. A more recent addition is The Farmers Market established in 2011 it offers a chance to purchase carefully selected, quality local produce.

Other treats include Pupprt Making Workshops, the first ever 3D visual music album - Holoctronica from the co-founder of Hexstatic, and Hellicar-Crago-Lewis Lloyd & Friends return using art, technology and design to create memorable experiences.