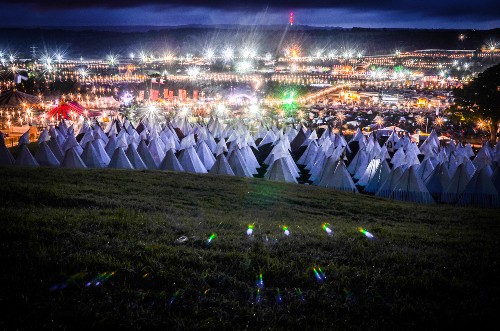 A unique feast of music set on a huge site offering a grand scale of entertainment unlike any other festival in the world. For five days the 1,100 acre Pilton farm plays host to a tented city in Somerset. As well as music from nearly every genre imaginable on over 100 stages, there's performing arts with cabaret, theatre, circus, children's entertainment, poetry, healing, green crafts and information and much more. Vibrant, spontaneous, colourful, and hugely entertaining.

The main Pyramid Stage headliners are Arcade Fire on Friday, Metallica on the Saturday, and Kasabian on Sunday.

The day and stage splits have been announced for much of the Festival, to see who is playing where see the Glastonbury Festival 2014 line-up page.

Expect something like 2,000 performances at 100 or so venues including music, cabaret, theatre, circus, a fantastic Kidz area, art installations and decor, poetry, green crafts and information and loads, loads more ... much more than just the music, so make sure you check it all out!

Away from the main stages, they have announced the debut of Arcadia's Mechanical Playground (now on the west side of the site), the launch of The Spike (a new wooded area in The Glade) and the unveiling of a brand new nightly show from the Mutoid Waste Company, A Kiss On The Apocalypse. The South East corner will continue to provide nightly revelry in Shangri La, The Common and The Unfairground. A newly commissioned Birdsong Symphony, recorded at dawn at Worthy Farm and mixed at Abbey Road studios in London, will also debut at the Festival this year.

Tickets have SOLD OUT and were priced at £210 + £5 booking fee per ticket + £7 P&P per booking with up to a maximum of 6 tickets able to be booked at once. Tickets were sold using the deposit scheme at a price of £50 per ticket, with the balances paid off in the first week of April.

There was a small sale of returned tickets which happened over two periods. The resale for Ticket + Coach packages were followed by a resale of General Admission Tickets.

Anyone aged 13 or over (when the Festival starts) who wishes to buy a ticket must be registered. Registration requires providing basic contact details and uploading a passport-standard photo. Once the photo has been approved, registers are sent a unique registration number that will need to be quoted to book a ticket.

Registration must be completed by Sunday, 20th April 2014.

Registration does not reserve or guarantee you a ticket in the resale, but if you don't register you will not be able to buy a weekend ticket for Glastonbury Festival 2014.

Each ticket sold will feature a photograph of the person in whose name it is registered and will be non-transferable. An existing registration can be checked here.

Glastonbury Festival believes that work begins at home, at Worthy Farm. Looking after the fields, the hedges and the livestock has always been the Festival's number one concern, and it is what life is all about. Please take everything you bring and your litter home with you and 'leave no trace'.

The Festival site is not expected to open before 8.00am on Wednesday 25th June. The option to sleep in the car parks in the evening on Tuesday night will once again be in operation. Please note there are no facilities available in the car parks on Tuesday night and people are expected to stay in their cars. It is also expected that Campervans will be able to arrive from Tuesday afternoon. From 8.00am on Wednesday pedestrian gates operate 24 hours a day until the end of the Festival. If you have any problems with your ticket, or getting on site, there are enquiry cabins at each pedestrian gate to assist you.