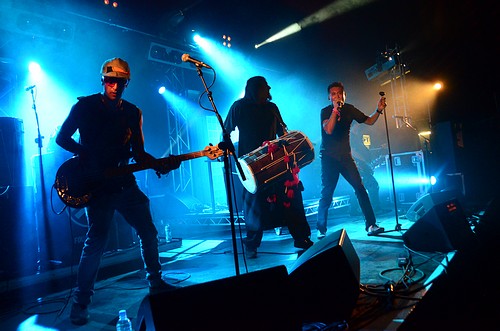 
Asian Dub Foundation, Dizraeli and the Small Gods, and Breabach top the acts confirmed for this year's Knockengorroch World Ceilidh.

Festival director Liz Holmes said, "We're really excited by the incredible array of talent we have joining us this year at Knockengorroch. As well as brilliant music acts there will be dance, theatre, multi-media and comedy; happy kids making things, workshops in all manner of new skills, good food, a healing area, a sauna, fire shows, world cinema, and lots more. Its brilliant to have so many inspiring artists join us in our mountain valley and we look forward to welcoming festy goers from all across Scotland and the rest of the world to enjoy our exceptional event in the hills!"

The festival held at Knockengorroch farm, Carsphairn, Kirkubrightshire, in Scotland will feature musicians from around the world heading for the far flung location, and the programme will also include arts, crafts and dance workshops, spoken word, comedy, performance art, installations, walkabout theatre, fire shows and kids activities.