This folk-tinged event, in its 13th year, takes place at Glanusk Park, Usk Valley, Powys, Wales. The dates for The Green Man Festival 2015 are from Thursday 20th to Sunday 23rd August. The festival offers live music with lots of folk and folktronica bands, plus film, literature, workshop and children's areas, and DJs.

In total expect  over 400 live performances across 17 stages.

Tickets sold out in the beginning of June. An adult weekend ticket was priced at £165 for adults, £140 for students, £100 for teenagers (aged 13 to 17 years), and £15 for children aged 5 to 12 years, infants and 4 and under can attend free, but need a ticket. A live-in vehicle ticket is priced at £70 and a car park pass is £5 for the weekend. Prices do not include booking fees.

The cinema programme at the 24-hour Cinedrome includes Inherent Vice, While We’re Young, Pride, Under Milk Wood, The Lodger (sound-tracked by Minima), Road House, The Duke of Burgundy, Paddington, Shaun The Sheep Movie, The Iron Giant, and Drifters, and The Holy Mountain (both with a score performed by Asteroid Deluxe).

The event also has 'Little Folk' for tiny tots to 12 year-olds with circus skills, a making things tent, fancy dress and musical storytelling. It is transformed into a magical wonderland where your small ones can make friends with the Mad Hatter and his chums.

In the mysterious wonderland there will be a musical playground of the Soundgarden, a chance to learn circus skills with The Flying Seagulls, cycle to listen to 'Patch & The Giant' on the Pedal Power Stage, get arty with Acorn Animations, make amazing shadow puppets with the wonderful Mr Wolf Collective, and joined the Madhatter's Tea Party for a spectacular finale to a fun-packed family weekend.

Experience the wonders of science and nature in the 'science' themed Einstein's Garden.The area is home this year to over 100 performances, from live comedy, music and theatre to walks, talks and interactive installations across three sustainably powered stages - The Solar Stage (sun), The Workshop Dome (pedal) and The Omni Tent (hydrogen fuel cell).  This year's theme is 'The Future'.

From food pop and dinosaur songs to stories for strangers and squirrels, there's fun for everyone, big or small, in Einstein's Garden. Author Emily Dodd will take festival goers on a journey through the forest with Can’t-Dance-Cameron and Hazel Nut the red squirrel. Plus Chris and the Celeriac an attempted boy band with two members, one of which is a root vegetable, hoping to make 'Food Pop' the next 'big thing' in music. Attendees can look at the world through another lens and make unexpected connections with Stories for Strangers, or relive tales of revenge, lost love and witch-hunts with Bristol's The Minke Whales, experience Ben Mellor’s slam poetry or join Emma Hooper – Waitress for the Bees - and make a riotous noise about dinosaurs and insects. Just some of the offerings scientists and artists are offering over their weekend's weird journey of discovery.

Green Man's new spoken word and literature stage is located in the 'Babbling Tongues' area and will be home to a line-up of authors, musicians, poets and playwrights. The stage will host Gruff and Guto from Super Furry Animals with Gwenno Saunders in conversation about the bands’ illustrious career. Pete Fowler and Ric Rawlins discuss 'Monsterism, there's a Pride and the Miner’s Strike panel discussion with Sian James MP, Dawn Foster and Dr. Emma Jackson. Mark E. Smith in conversation, Richard King discusses his new book, and Owen Sheers reads excerpts from 'I Saw A Man'. 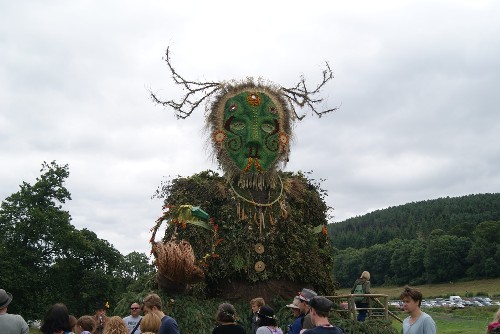