A unique feast of music set on a huge site offering a grand scale of entertainment unlike any other festival in the world. For five days the Pilton farm plays host to a tented city in Somerset. As well as music from nearly every genre imaginable on over 50 stages, there's performing arts with cabaret, theatre, circus, children's entertainment, poetry, healing, green crafts and information and much more. Vibrant, spontaneous, colourful, and hugely entertaining. The dates for the 2013 Festival are confirmed from Wednesday 26th to Sunday 30th June.

The line-up details, stage and day splits for the Glastonbury 2013 line-up click here.

The Common is introducing a new venue: The Rum Shack, hosting Invisible Circus and making one hell of a mess with it's very own Tomato Fight. Inspired by a yearly Spanish tomato fight held to honour the saints, The Commons version will be hosted by Bearded Kitten on the Sunday and held beneath the backdrop of Mayan splendour at The Temple. For anyone wanting even more hedonism, there will be a UV paint powder fight which will leave everyone with a warm, slightly neon glow.

Tickets have sold out. A standard ticket was priced at £205 + £5 booking fee per ticket + £6 P&P per booking. Before you can purchase a ticket you need to register: see below for details on registering.

A car park ticket was priced at £25, and campervan tickets were priced at £85. There are also combined coach and festival tickets were also available in the resale. Up to 4 tickets could be bought per transaction in the re-sale.

The ticket price covers entry to the Festival site from Wednesday 26th June until Monday 1st July 2013 and, as ever, includes a free programme. Once again, the Festival will be raising funds for Oxfam, Wateraid, Greenpeace and a host of local charities and causes (in 2011, more than £2m was raised).

The date for paying ticket balances and to book everything else needed (tipis, campervan tickets, parking, cancellation protection) for international and UK ticket holders passed.

Everyone who plans to the come the Festival must register, and that includes children aged 13, 14 and 15. Each ticket sold will feature a photograph of the person in whose name it is registered and will be non-transferable.

Registration did not reserve or guarantee you a ticket when they went on sale, but if you don't register you will not be able to buy a weekend ticket for Glastonbury Festival 2013. If you opt to save this information you will be able to use your registration number again in future years. Make sure the e-mail address you provide is one to which you will have long term access.

Registration will be temporarily suspended before and during the main ticket sales periods. Online registration can be carried out by clicking here.

Car park tickets, campervan tickets and routing stickers will be sent out with the Festival tickets; unless bought in a later transaction, in which case they will be sent separately and will have a separate booking reference for use on the ticket tracker.

Glastonbury Festival wants to reward people for choosing to come to the event by public transport or by bicycle. The Festival has launched a 'Glastonbury Festival Green Traveller' package in 2011, which returns this year which they hope will provide an extra incentive for Festival goers to "go Green".

Ticket holders who arrive at the Festival by public transport or bicycle will be given a Green Traveller lanyard, offering:

- Vouchers for discounts on main meals
- Solar showers, solely provided for Green Travellers
- Access to compost toilets
- A discount on a Festival T-shirt

Plus, this year, our Green Traveller team will be wandering the site throughout the Festival randomly giving out some great prizes to people proudly wearing their Green Traveller lanyard around their neck. These prizes will include:

The idea of the scheme is to reward those who travel to Worthy Farm by public transport or bicycle.

Over 50 per cent of Glastonbury Festival's CO2 total emissions come from how the Festival goer makes their way to the site. The Festival have said they understand that public transport can be expensive and will be working on trying to keep the prices this summer fair. There will be more information on the Green Traveller scheme (and how it will work) announced soon.

Coach is probably the best way to arrive - not only is this more friendly to the environment, it can be more fun than a car with the chance to meet new people before you get to the Festival. The services drop you at the Festival Bus Station near Red Gate 1, right next to the entrance (much closer since 2002 than it had been previously).

For the first time the Festival is offering ticket holders, a range of pre-erected off-site camping facilities in custom-made and pre-erected Festival accommodation. So festival goers can travel to and from the five day festival with nothing but their bags.

In order to make an accommodation booking festival goers must already have a valid ticket booking for Glastonbury 2013. Everyone who wishes to stay at Worthy View must have a valid Festival ticket. All prices are for five nights - Wednesday June 26th to Sunday June 30th, inclusive, and do not include Festival tickets.

There are various tent types on offer:

All prices are inclusive of VAT.

The Festival site is not expected to open before 8.00am on Wednesday 26th June. The option to sleep in the car parks from 9pm on Tuesday night will once again be in operation. Please note there are no facilities available in the car parks on Tuesday night and people are expected to stay in their cars. It is also expected that Campervans will be able to arrive from Tuesday afternoon. From 8.00am on Wednesday pedestrian gates operate 24 hours a day until the end of the Festival. If you have any problems with your ticket, or getting on site, there are enquiry cabins at each pedestrian gate to assist you. 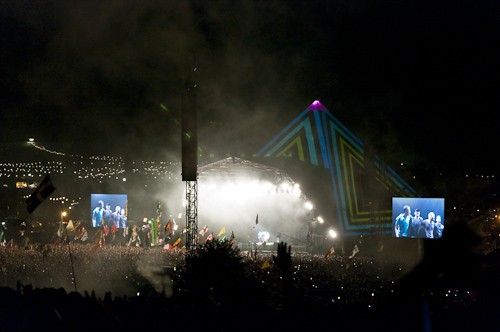