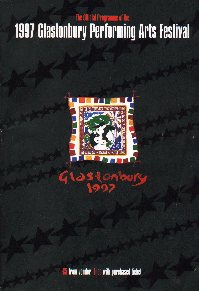 With heavy rain before and during the Festival, the site turned into a lake of mud. Although licenced attendance was 95,000, there were many people who got in through holes in the fence before torrential rain on the Friday night made many decide to leave on the Saturday. Many of those who did stay spoilt their own enjoyment by moaning about the mud rather than enjoying themselves.

BBC2 broadcast some of the fun live to the nation, leading many to think it's always that muddy.