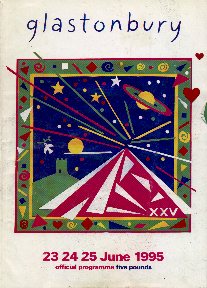 The licenced attendance was again 80,000, although the fence was pulled down, in effect making it a free festival for anyone who wanted to join the fun.

It was broadcast on Channel 4, with some of it going out live.

The Pyramid Stage featured (in no particular order): Simple Minds, PJ Harvey, Oasis, The Black Crowes, Page & Plant, Jamiroquai, The Cure, Orbital, Lightning Seeds, and others. Pulp replaced the Stone Roses at short notice, to give a career-making performace.

The N.M.E. stage was again the 'second' stage this year. Performers included (in no particular order) Goldie, Dodgy, Elastica, Sleeper, Supergrass, Shed 7, The Verve, Ash, Prodigy, Menswear, Skunk Anansie, The Shamem, and others.

The Acoustic Tent included Portishead (for those who were lucky enough to actually get inside the tent), Billy Bragg, John Otway and The Big Band, Difford and Tilbrooke, Mike Scott, Nick Lowe and others.

The Avalon Stage included Banco de Gaia, The Dharmas, Steeleye Span and others.