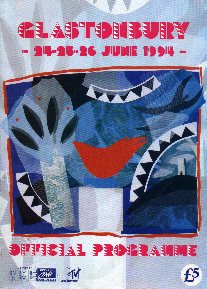 The Pyramid Stage burned down a few weeks before the Festival, and had to be replaced by a temporary stage, which is part-powered by wind turbines.

The weather was scorcing hot, with much more risk of sunburn than mud. Parts of the Festival were broadcast live on MTV, and you couldn't help but notice their very obvious presence on the site.

This year had the first death at Glastonbury Festival, from a drugs overdose. There was also a shooting incident on the Saturday night.

A donation of £300,000 was made to Greenpeace, Oxfam and local causes.

The Jazzworld Stage included Urban Species, Loop Guru, Outside, and Jah Wobble's Invaders of the Heart and others.

The Avalon Stage included The Dharmas, Ed Alleyne Johnson, K-Passa and others.