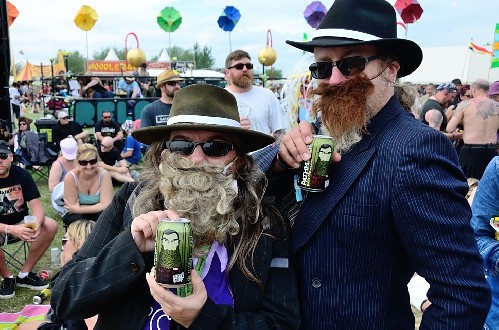 Bearded Theory 2017: bizarrely named yet perfectly formed, this festival runs over the late May Bank Holiday and is now 10 years old. It has won numerous awards - last year the Best Family Festival - so I decided to put this to the test and expose my 9 year old son to its delights.

It's held at the pretty Catton Hall Park near Lichfield. Let me get my one complaint out of the way quickly: 8.00pm is a very early closing time for gates on Thursday; we would have loved to see Dreadzone (complete with fireworks!), but coming up (or down) from London after work and school just takes that little bit longer. We couldn't risk it. So we missed what were - in my opinion - some of the best bits of the line up.

Train travellers from London take note: the easiest way to get to the site is actually going up to Lichfield Trent Valley and then to the site by taxi; particularly if travelling in a group. You can book a taxi for around £15, and it saves you the connecting journey over to Lichfield City and bus fare. 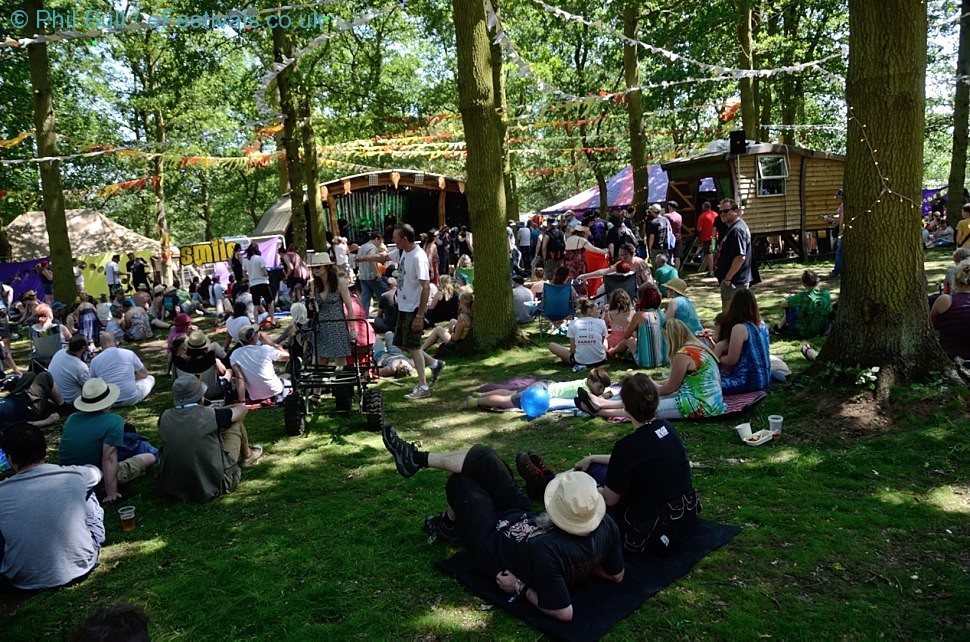 We arrived mid-Friday just in time to catch Son Primo, the opening act on the beautiful Woodland Stage (complete with a well stocked real ale bar). A great location to stay out of the sun for a while - Friday was a scorcher. Not that I'm complaining, the weather was altogether pretty good. There's a big sheltered camp fire put on in the middle of the arena every night to warm up and socialise, but we hardly needed the warm up this year, as even the nights were quite balmy.

The main stage is named the Pallet Stage, a nod to the improvised birth of the event in the back yard of a pub. The first act we got to see there on Friday was Jaya the Cat, never heard of them, but very enjoyable they are with their combination of Punk, Ska and Reggae. Even without music, Geoff Lagadec, the singer, sports enough facial hair to be a worthy contributor to a festival named after it.  We stuck around for Ferocious Dog and then wandered back to the Woodland stage to chill in the shade and and watch Smiley & The Underclass. Friday's headliners are Skunk Anansie, but we soon moved over to the lavishly decorated Magical Sounds tent for Banco de Gaia. Seen through the eyes of a child, this dance tent looks truly magical. We finished the evening sitting outside the Maui Waui (Octopus) stage, listening to sounds wafting out. A late bout of urgent munchies needs to be satisfied with some chips from a nearby stall - somewhat pricey at £3.50 a pop - although a reliable source tells me that perfectly good burgers could be found near the main stage for a fiver, so it is worth to look around for the best food deals. Except, that isn't what you do with a hungry child late at night, unless you have nerves of steel. 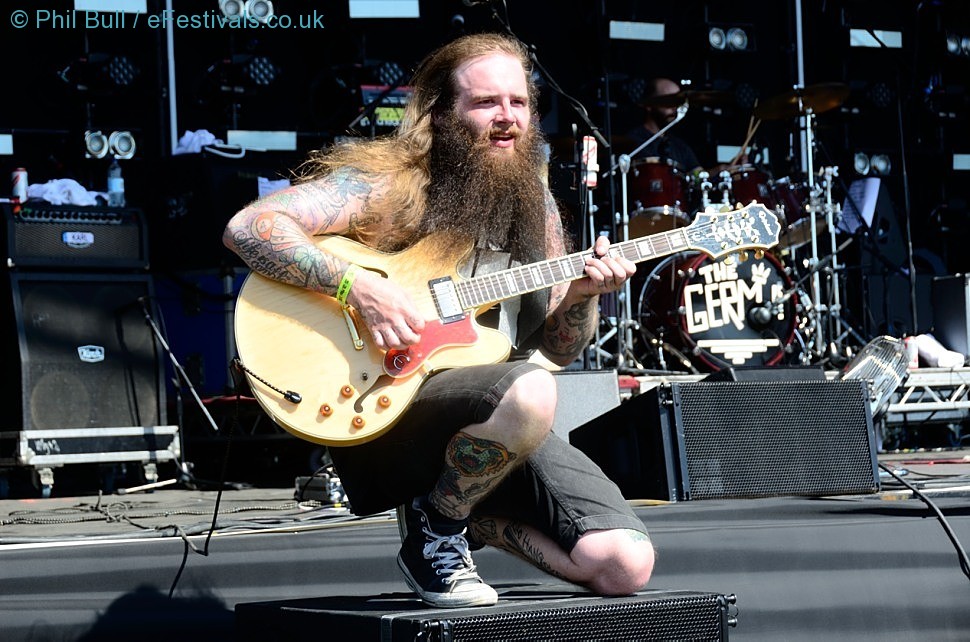 We started Saturday by exploring the large Children's Village near the main stage - a perfect location, as adults can keep an eye & ear on the musical action whilst the young ones indulge in all the free fun set up for them. There's loads of activities, and, as the festival takes place in term-time, there's even an Ofsted registered Bearded School run by teacher volunteers every year. You can book a place for your child in the hope of placating their school's headmaster. My lucky son John was off the hook completely, though, as his school decided to make the Friday a recess day. I wondered why and I kind of expected to bump into one or two of his teachers (didn't happen). The Rogues Hideout is a small stage at the end of the Children's village catering for teenagers. They really do have every angle of family life covered. There's also a nice funfair with some select rides right in the middle of the site, but that would work out somewhat pricey if one had to entertain several kids, so it's great to have a free alternative. 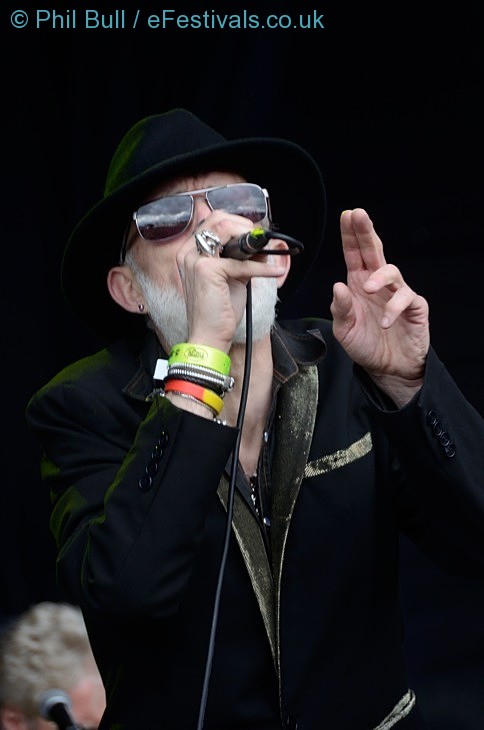 Whilst the young one explored I caught a bit of Josh Doyle, and then we both indulged our love of reggae with African Head Charge - a great set and performance, in musical terms, probably my highlight of the day. This was followed by Alabama 3, who told us that "this is what the blues sounds like in the 21st century, long-hairs!". Hehe. Very good too, although I slightly mourned having to chose between them and Wille and the Bandits who were playing the Woodland Stage at the same time. Natch, that's the eternal dilemma at festivals, there's a tent, Convoy Caberet, that we never made it once, being too busy. Back to our tent for some warmer clothes, as Saturday turned out to be quite windy and chilly, and then on to the night's headliner, Seasick Steve, who I liked better than I thought I would, alas, halfway through the young one faltered, fair enough, he'd put up a good fight against sleep. After a few more minutes of chilling in the Magical Sounds tent with Gaudi, we were ripe and ready for the sleeping bags whilst entertainment for the untamed grown ups went on until 3am with the likes of System 7. Apparently, The Fall played an epic set that defined the Woodland stage that evening. Ok, we missed that, and I am not sure I would have liked to expose the 9 year old to a good old rant by Mark E Smith just yet, but we'll take the word of people who went and witnessed it.

Sunday morning, it turned out that young John most definitely needed to go and see Keefs Big Uke Jam at the Woodland stage. How come? He'd made friends with our camping neighbours who are fans and, according to him, the coolest people ever (Miles, Stevie and George - yes, apparently you are). Impressed  by his interest and determination, I agreed and we had a fun start to the day with ukulele covers ranging from Status Quo to Pink Floyd. No kidding - they did Wish You Were Here on ukulele, I guess one just had to be there to believe it.

Off then to the main stage for a piece of festival tradition - gathering as many bearded people as possible in a field and picking the bearded winner of the dressing up competition - this year's dressing up theme being "Mobsters & Lobsters". The winner is whoever gets the loudest cheer from the crowd. There's an amazing display of original outfits and (fake) beards, but the winner was cute 7 year old Poppy who's outfit combined the 2 themes and yes, she had a beard as well. Last year a bunch of kids dressed as bearded minions took the prize - I can see a populist theme emerging.

This was followed by great sets from Nucleus Roots and The Selecter. For a change, we popped over to the Magical Sounds to catch a glimpse of 3 Daft Monkeys, but Sunday being warm again, it's quite stuffy in there and the young one felt squeamish, so over to the Woodland stage for Kathryn Roberts and Sean Lakeman, some lovely folk with murderous lyrics to chill to. As usual on our way there, we had to stop at the potato games tent where new board games could  be tried for free, another big attraction for kids, although some of the games are definitely designed for adults!

Back to the main stage for Vintage trouble, one of my must sees, and young John enjoyed it too, though his highlights were Ty Taylor's crowd surfing antics. Being in two minds about sticking around for closing headliners Madness or returning to the Woodland stage for Reverend and the Makers, the choice was suddenly made for me when John discovers our camping neighbours in the crowd, he's been waiting for another chance to socialise with them all day, so we stay and Madness do their thing, a set that starts a bit slow but ends with all the crowd pleasers, complete with streamers, confetti and impressive closing fireworks. I couldn't have a happier kid on my hands, or a more cheerful crowd around me. 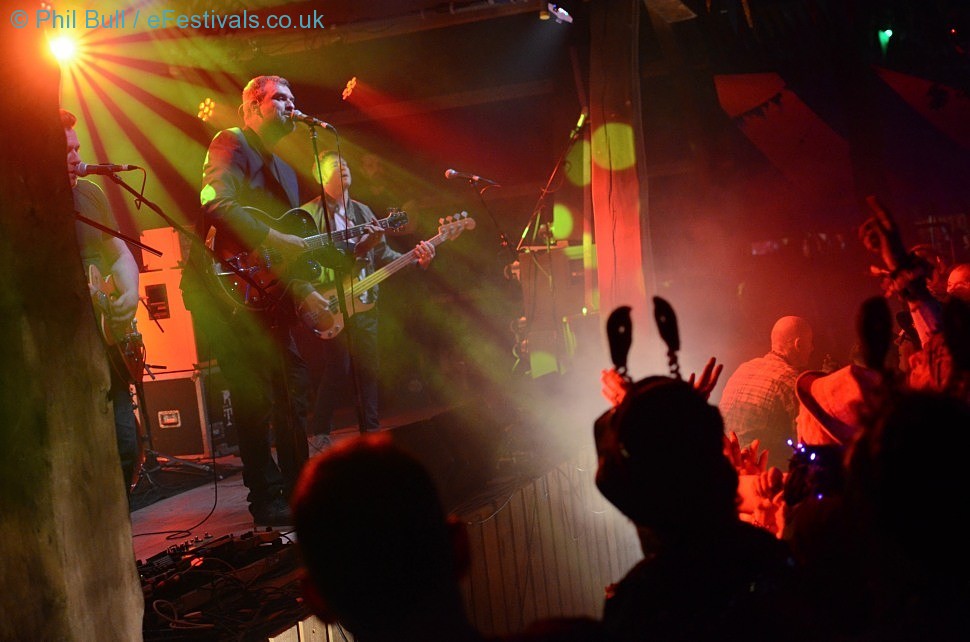 And so, for us, with a final glimpse of Transglobal Underground at the dance tent and a ride on the big ferris wheel, ended the 10th year of a festival that started in 2007 in a field behind a pub. Some people say a car park, which sounds even less glamorous, but wherever it was, it has come a very long way. Young John has declared it to be the best festival he ever went to, and he's already been to a few. I asked him about any downsides, from his point of view, and got an indignant "There was nothing bad. It was great". Out the mouths of children...... it seems Bearded Theory really deserves its award of Best Family Friendly Festival. Because, apart from very accommodating organisers, it also has some of the friendliest punters, even an errant frisbee, that nearly knocked over the breakfast one of our camping neighbours was cooking, resulted in no more than a shrug and a good natured "hard to play frisbee with this wind going, isn't it?".  Aww. Thank you.