Bearded Theory is a festival-goer's festival 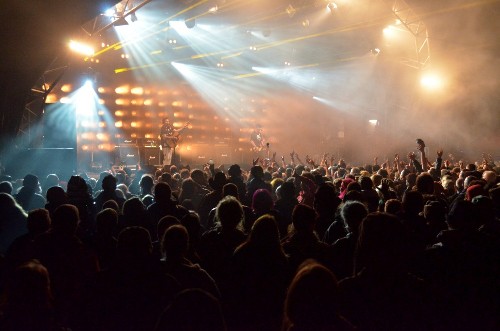 Bearded Theory, the festival where there was no such thing as bad weather for those with the right fancy dress. A festival where a fabulous, cross-dressed Disney princess grooving before the Main Stagebarely warranted a second look, even as he lifted his skirts to keep them from amire created by three days of downpours .Where drunken punks plastered head to foot in mud slipped and stumbled around the Acko’s Bar alongside groups dressed up as ragged, warty nosed trolls, fluffy satyrs, spinsters or superheroes. In the warmth and shelter of the Magical Sounds tent day-glo rave faeries mingled easily with woollen-masked hippy gimps and lads in oversize baseball caps. Over at Tornado Town tent shiny corsets and big boots werea must-have, with fezzes for the gents. By far the most popular and practical costume,however was straight from the pages of a Pete Loveday comic, that dreadlocked, military surplus lookso favoured by old schoolfestival goers, and the type who findsaspiritual home at the Bearded Theory festival.

A quick run through the line-up illustrates the festival’s focus on‘alternative’ acts from back in the day; playing on the main stage were The Blockheads, The Stranglers, Oysterband,Peter Hook and the Light, Ali Campbell’s half of UB40, 90s teenager favourites Carter the Unstoppable Sex Machine, Pop Will Eat Itself, and The Wonder Stuff; with Dreadzone, and Dub Pistols representing for the drum and bass massive.There was a big nod to veterans of the festival underground with bands like, Tarantism, and Culture Shock.

At Magical Sounds acts like The Orb Sound System, Astralasia, Suns of Arqa and Finitribe Soundsystem took us on a super squelchy trip to trips past. On other stages were outlandish space rockers  Poisoned Electrick Head and the ‘punk as’ Ferocious Dog. Bringing us into the current millennium were two bouts of civilised debauchery from 3 Daft Monkeys - now 4 daft monkeys and an accordionist –and an off the hook set from from Babyhead. The epitome of the Loveday archetype, Levellers frontman Mark Chadwick's festival closing set at the Locked in the Woods stage was met with reverence. Few have had a more pervasive influence on festival culture and many make a favourable comparison between the bands Beautiful Days festival and the Bearded experience. The music policy and crowd are much the same, as are the vibes and pungent aromas blowing through the air. Both are for punters and performers who’ve been festivaling from time.

So to the highlights, for me Fishbone were the stand out act. The infectious energy of slap bass and brass fuelled funk rhythms put a big ol’ smile on my face and shake in my ass. ‘Everyday Sunshine’ did indeed bring out the sun, which stayed out for some country stomping and a boogie-down to ‘Bonin in the Boneyard’. The Stranglers were a revelation; I loved the simplicity of the set up, and the complexity of the music. They worked through a back catalogue of hits, each recognisable in the first bar but each a marvellous rediscovery – ‘Always the Sun’ and ‘Walk on By’ my particular pick. UB40, well the main players of UB40 at least, were superb as Sunday night headliners. With bass powerful enough to shake furniture in the beer tent, they pumped out classics of 70s reggae like ‘Homely Girl’ and ‘Cherry Oh’ and brought the set to a close with an extended ‘Red, Red Wine’ which had me wining in the ever thickening front of stage gloop.Ali Campbell’s sweet voicing still sets the bar high, and with Astro onside it was a set to please fans and writers of Jamaican music, if not Ali’s brothers or the band’s creditors.

Away from the main stage there was plenty going on, especially at Tornado Town. Babyhead’sFriday night set revived me after Carter’s dirge, here there were serious grooves with a serious message, a horn filled rootical romp. A midnight Hayseed Dixie showwill always be worth checking out and for this one they pulled a huge crowd. The atmosphere was febrile as we testified to the healing power of moonshine influenced rock covers and bluegrass classics. Beardy Keef & the Uke Ellington Orchestra’s Sunday afternoon UkeJam was another incredible experience. Having packed out a smaller tent last year Keef did it again at Tornado Town, this time was joined on stage variously by Mark Chadwick and members of Leatherat, Barsteward Sons of Val Doonican and Ferocious Dog whilst a tentful of amateur strummers followed the projected chord sequences for ‘Rudi’ and an extended medley on the chords C, G, Am and F. Boot Hill All Stars sold their set as 40 minutes of bollock grabbing nonsense, which turned out to be an entirely fair description, although the grip was loosened for a ‘Summertime’ interlude.

Gails Tea tent aka Something Else Stage was home for all things acoustic and intimate, and was the most consistently ramajam tea tent I have seen. Walking past late Friday night, I heard a great singer who turned out to be rising star Gaz Brookfield. The next I caught the fantastic line ‘We drank the Levellers rider’ which drew me in, and I was delighted to find Tarantism in their element squished into a corner. Theyfinished my Saturday night off nicely knocking out ‘Groove is in the Heart’ to a distinctly hazy eyed audience. This was appropriate as earlier in the same tent duo The Devil's Prefects had kick started the day with a hilarious country and western pastiche set, celebrating the Texas traditions of truckin’, worshippin’ and zombie bashin’. They ran the show so well, mirth built and built up to a finale where everyone gleefully joined in with words and hand actions ‘Knocking one out for the Lord’, a demon that is (of course).

Elsewhere on the site Angel Gardens provided a magical playground or kids, with any number of things to make, see and do, and also plenty of opportunities for mums and dads to hang out. The Garden was cleverly sited between, but not linking, Tornado Town and the Main Stage; it could be easily included in a bimble and offered a bypass for the inevitable pester pressure created by the tat stalls which lined the thoroughfare. Happily there were some stalls on the main drag with more character like the Dread repair stall, whose locticians had some seriously matty dreadlocks to work on. Mention must also go to the Cowley Foods smoked meats and delicacies tent - which surely everyone had a nose around sooner or later. Of course there were workshops on tribal drumming, willow weaving and pottery and naturally hippy healing therapies and massage stalls.

All in all it’s a pretty decent offer the only real gripes I had were about the site itself. Compared to the landscaped parkland at Kedleston Hall, the Catton Hall site is just a floodplain of river Trent and it really was quite plain. Granted it made up for in practicality what it lost in character, but it is just a big flat expanse with hardly any inherent interest. The Lock in the Woods stage was a possible only exception – in that there were some trees – but that was really it. Then there was the turdis problem, there wasn’t enough, those there were, were filthy. Something went wrong for sure, disgusting. And finally the site is in possibly about the last place you’d want to get to on a Friday afternoon, with a choice of sitting in jams on the M42, M1 or M6 one which has no right answer.

I guess its all part of the Bearded Theory story, now chapter 7 is done I’m looking forward to the next edition to see what the organisers will do. Judging from the low turn-out, the fake beard competition (won by a glitter ball based number, by the way) has rather run its course. Still the core audience of 90s festival goers are a loyal bunch who’ve kept the faith this far, so even if they have lost interest in the Beards, seems a good bet they’re still into the Theory and will be back for chapter 8, especially if the ticket price stays as affordable and the acts so appealing. It really is a festival-goers festival.