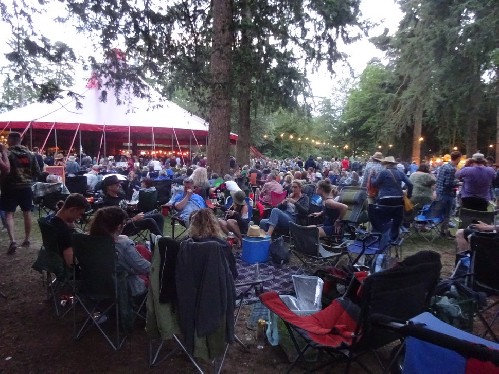 
On what was a return visit to Red Rooster, I wondered whether I would be as impressed as last time, when I had described the site as jaw dropping. At the risk of repletion, it still is, and by a country mile, the most beautiful festival I have attended. The Black Bourne River creates a natural barrier that means there is no need for a perimeter fence, so that the views of the Suffolk countryside stretch out well beyond your field of vision, a stunning backdrop to the business in hand. Pedalo boats, shaped like giant Swans, navigate a central lake as punters meander through paths cut through natural meadows, left to find their own way to the two main performance areas. With no marketing and no decoration, the festival gives you space to breath, relying on the natural wonder of the site to captivate your imagination.  None of which, of course, would have cut the mustard if the music wasn’t up to much, but fortunately, if anything, the offering this year was stronger than ever. 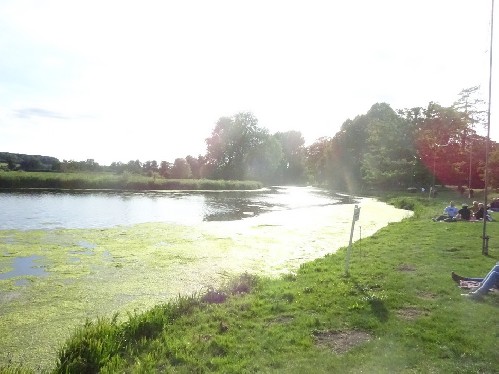 I’m guessing that at past festivals, Thursday night’s entertainment was no more than a civilised way to keep early Red Rooster campers happy. If so, those days are long gone, with a triple bill that easily trumped last year’s offering. Kicking things off, and obviously thrilled to be doing so, was multi-guitar Treetop Flyers, reminiscent of Goldheart Assembly and just the sort of bright and breezy way to get the party started. William the Conqueror followed and was even more of a surprise. Low down on Friday’s Little Rooster running order, I expected small pleasures at best. On the contrary, with an opening number that owed more than a little to Feelgood’s Roxanne, we were treated to a pulsing set was full of wit and energy.

Headliners for the night, Low Cut Connie, packed the stage with personnel, whose interminable sound checks unfortunately dissipated some of the party atmosphere. It was something lead singer Adam Weiner looked determined to put right from the outset with a ferocity of performance that bordered on confrontational. Weiner is a man entirely untroubled with self-doubt, impatient for his audience to catch on just how brilliant he is. The jury is still out as to whether this makes him a consummate performer or a bit of a knob, but there’s no questioning his commitment to putting on a show. When not standing on his piano, punching the air, he was hammering it Jerry Lee Lewis style, while the band played one bombastic tune after another. Imagine that Jim Steinman teamed up with an adrenaline fuelled Neil Sedaka instead of Meatloaf, and you’ll be getting the picture.

Friday mornings start early at Red Rooster, with a roster that stretches from ten in the morning until the small hours, but I managed midday, with revisiting William the Conqueror on the lovingly fashioned Little Rooster stage, a tiny barn with a cocktail bar attached and surrounded by hay bales. In the light of day they were still as good as I remembered, the first of many acts distinguished by being not very well known, and yet very good. Plaudits are due to the folk of Red Rooster for harvesting such a roster of talent, but flippin’ heck they did get a bit maudlin, Cheer up Prinz Grizzely and cheer up Orphan Colours, you’re at a festival! Thank goodness for The Johnsons, who cheered us all up, with singing and playing that was imbued with the joy of life, just the right amount of silliness, and some ace wash board playing. They were followed by the impressive Sam Morrow,  a man unapologetically influenced by ZZ Top (he pushed out a pretty good version of Sharp Dressed Man) who delivered the first powerhouse performance of the day.

Jarrod Dickinson, despite an excellent moustache, and then the Black Eyed Dogs, heralded what was, for me a fallow period that had me ping-ponging from squeaky voiced Fiona Bevan to the challenging self-reflection of Carson Mchone, looking for fun. It’s important to say, however, that all these artists had their admirers at a festival that can hardly be accused of misleading the punters. If the sharp end of country music isn’t to your taste (and isn’t to mine) then perhaps you’re the problem, not the festival that gathers together folk that love this stuff and gives it to them in spades. What we did have this year was welcome variety, so it was before I’d reach breaking point that along came Dale Watson, and I’ve never appreciated rockabilly more. Apart from the obligatory Johnny Cash cover this was a classic performance and a catalyst for the first really packed venue of the day.

Inevitably, things were no less claustrophobic for Nick Lowe, an obvious festival favourite, who reciprocated the affection with a comprehensive run through of his greatest hits and more. He was accompanied by Los Straitjackets, supposedly a masked band of South American wrestlers. Superb musicians to a man, they came into their own when he left them to it mid-set, pumping out a medley of guitar classics, including a teasing snatch of Breaking Glass. It was about the only hit we didn’t get in an extended encore that reminded us how long and illustrious Lowe’s career has been. 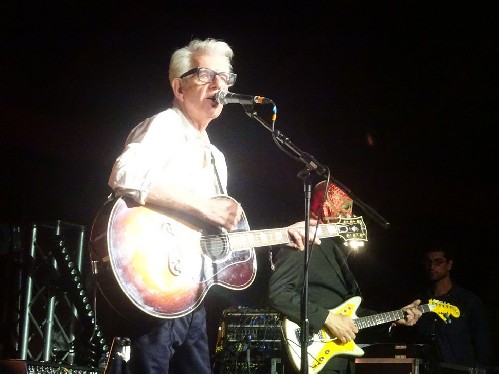 Not that longevity was a prerequisite to quality, as youthful French trio Howlin’ Jaws demonstrated at the start of a beautifully sunny Saturday, though it was Powersolo from Texas that took the festival by the scruff of the neck with an eardrum busting set of barmy exuberance. Theirs was a fine, manic performance, but it was swiftly eclipsed by scene stealing Oh! Gunquit. Making a marvellous racket, lead singer Wanda Slazzy played trumpet, crowd surf, hula hooped, and generally upstaged all about her. The sun briefly drew me back to the Little Rooster stage, where a huge crowd was watching Sam Barrett sing soulfully of disabled men in Yorkshire pubs (like you do) but the main stage just had too many treats to keep me away for long. Errol Linton impressed with his skank inflected blues, while Muddy Gurdy were pleasingly distinctive. The hurdy-gurdy’s strange and hypnotic sound may have been the USP of the band, but it was Tia Gouttebel’s beautiful voice, reminiscent of Karen Carpenter, that hooked me. I even, Lord help me, got behind Team Country in the end, won over by Jesse Dayton’s powerful voice and infectious good humour. Next up, Cedric Bernstein’s guitar skills were astonishing, and was much admired, but I felt he took the pace down a notch – there is only so much guitar and drums can do on their own – so by the end of this set I was twitching for the headliner to come on.

The Budos Band were, in the words of Sir Humphrey, a brave booking. Comprised of bass, guitar, drums, keyboards, and a whole lot of brass, the outfit played wild and wailing jazz/funk that frequently sounded like death metal on saxophone. Inexplicably choosing to play in almost complete darkness, this was a smoky New York bar transposed into Suffolk. I thought them astonishing – a huge, compelling wall of sound and a fitting end to a day typified by eclectic taste and superb musicianship. Admittedly the tent ended up roomier than when it started, but hats off to the Rooster folk for trying something different.

And that was it, barring a late night visit to Howling Woods, a venue that had been empty every time I’d popped in - the various smiling DJs doing their best to look happy about it. Finally brimming with life, including a bearded man dancing in a cage, it made for a pleasing way to wind down, whether chatting fireside to fellow Roosters, or jigging along to Andy Weatherall’s record collection, as he curated tunes into the small hours.

This was such a marvellous little festival – the archetypical best kept secret – packed with friendly folk, and (despite frequent dubious instructions from the compere to get tanked up between acts) no belligerent drunkenness or foul play from a civilised, self-policing crowd of good-natured music fans determined to have a great time. The food, from what I saw and tasted, wasn’t cheap but looked to be as carefully curated as the music and of a universally high quality. The site was kept an immaculate, litter-free pleasure garden, and treated with the same respect you might give your neighbour’s back garden. I was going to end by saying “if only all festivals could be like this” but on reflection, the event is so tied up with the people that go and the place that hosts it, such an idea is fanciful – Red Rooster is genuinely unique. 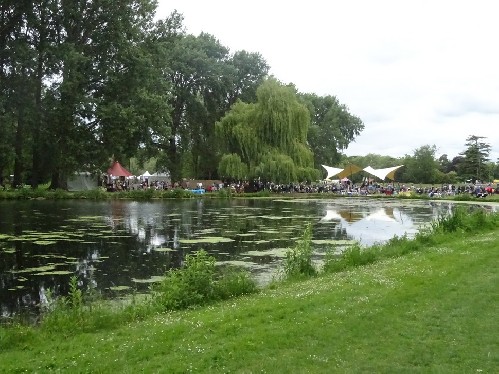