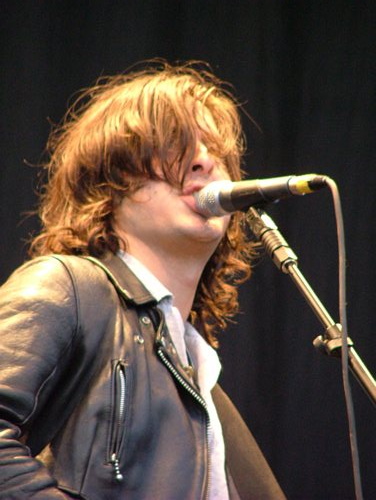 The venue was a small bar in North London, and the occasion was a Press Conference in aid of The Libertines reuniting as a band to play on the main stage at Reading and Leeds festival this summer. Relaxed and full of jokes, the boys were very laidback and appeared to be a world away from the troubled band that split in 2004. After the interview, the boys treated the room to a very close and harmonic set of songs, including their old classics, proving that they really were back on form... for now at least.

Here are the best bits from their interview:

Why choose now to get back together and why pick Reading and Leeds over other festivals?
John: It kind of feels like the right time really. It's not too long since we split up and it feels like a good time to do it now.
Carl: It's been gestating for a while and I think we've all been apart and evolved in our own particular ways. John's right  it just does feel right. Pete: It's not really our choice because if we all decide we want to play together, it's just finding the right moment, even like today. So any chance to play together and Reading and Leeds is a good as place as any  getting as many people as you can in one place and just having it up.
Carl: It is a really good festival.

Melvin Benn said that it had been a lot of hard work to get you back in the same room together. How hard has it been for you?
John: I think it has been quite hard...
Pete: It's a fucking nightmare  he [John] lives in Denmark, he [Carl] never answers his phone, and he's [Gary] been starting a family...
Gary: It has been difficult to get us together but it's more to do with the fact that we have all been busy doing other things. I mean, even with the demise of Dirty Pretty Things, Carl straight away started writing music for his solo project, I started my own band, Pete's always constantly been working on his solo project and Babyshambles; John lives in Denmark and has also started a family, so we've all been actively pursuing other music projects so it's not for the lack of want. It's more to do with the fact that we have actually all been busy playing music or trying to play music.

What is it about the 1.5 million pound appearance fee that's appealing to you?
Pete £1.2 million  what's appealing about the money is what's left over after tax...obviously. Which turns out, luckily, is just enough to pay last year's tax bills.

This is a question for you Pete - Can you tell me what it feels like to have The Libertines back together?
Pete (Long pause) Not really. Otherwise I probably wouldn't be in a band; I'd probably write books or stand on a soap box. It's odd really  the way we've always communicated with each other successfully is through music; I know it sounds really naff but it's true, and that's how and why we're together.
(Carl and Pete hug)

How does it feel?
Pete I don't know yet because we haven't actually been in a room alone together.

Do you see this as part of your rehabilitation?
Pete Rehabilitation from what?
Well, your drug problems are well known...
Pete Not really. I'm trying to keep that as quiet as possible.
[Everybody laughs]

Is this appearance the start of The Libertines coming back as a band in full?
John: I don't know, it could be.
Carl: When you start a band and you all get in a room together for the first time, you don't know what you're going to do, do you? [To Pete] You say this...
John: It kind of depends really. It totally depends but I just think we'll take everything as it comes really. You know, we'll do these gigs and hopefully it'll be great times, and then that'll be the start of something.
Pete We were so desperate to do something and we couldn't quite put out finger on it but it was something to do with performing songs, and we were kind of falling over ourselves to do it and it all got so messed up but looking back on it we actually did produce things that we're all so proud of, and we just want to get back to that really because it all got overlooked. I'm dying to just play some of them songs with the boys and get some new things done.
John: I think we'll just do it 100 percent and basically see what happens.
Carl: 4 months is a long time in The Libertines so whatever happens, happens. If it works, it works; if new things happen, they happen; and if they don't...
Pete: ...They don't.

Are you planning on writing and recording any new material?
Carl: Well, we're gonna write.
Pete: We haven't got plans for it. I think it's gonna be hard enough to work out some of the riffs from the old days to be honest. I tried to play 'Boys in the Band' the other day and I couldn't for the life of me work out what was going on.
Carl: We just wrote a song in a guitar shop just now. We bought some guitars to bring down here and it turned out to be 'Don't Look Back in Anger'. But we're gonna keep working on it, you know.

What can we expect to hear from you at Reading and Leeds festival set-wise. Is it going to be mainly old favourites?
John: I think it will be, yeah. I don't know if it's really the right time to be doing new songs at Reading and Leeds.
Carl: We might do, we'll see what crops up.
Pete: Who knows really but isn't that what people want?
Gary: Well the one thing I learnt from joining the band, because obviously most people who are into the band know the history of The Libertines - that Pete and Carl set the band up, and that John was one of the founding members and I came along a little later on. But one of the things that was most important about the band was the fact that you never kind of knew what was going to happen on a day to day basis. That's pretty much what has brought us to where we are right now. The fact that it is kind of all up in the air, and one day in the life of The Libertines isn't necessarily going to be exactly the same the next day. It kind of goes the same way musically as well; there is very much a Les affaires approach to the way that we do music. It's pretty much on the basis of how Pete and Carl have decided how they wanted to approach it and me and John have come onboard and hopefully have joined in and in spirit. So musically, who knows exactly what's gonna happen? We don't know what's gonna happen but we do now that it will be as heartfelt and as dynamic as it possibly can be.
John: I was kind of pleasantly surprised when we did the photoshoot for NME last week and it just felt really great to see the guys again because fundamentally we're really good friends; we've been friends for a long time, and we love playing music together. That's it really.

Part of the energy of The Libertines gigs in the early days was how sweaty and intense they were in the small venues. Were you always going to go back to the Main Stage or was it a temptation at all to headline the Second Stage?
Carl: We didn't really pick our stage. We played once on the other stage but our amp broke and we were left standing there for about 20 minutes.
Pete: No, your amp blew up so we tried to play 'The Ha Ha Wall' and then you got the hump, and then at Leeds we had a scrap and that was it really... It's unfinished business with Reading really; even if we did have new songs we wouldn't play them because we're still yet to play the old songs.

What was it like, what were your memories of it?
Carl: Enchanting...No, I saw Rage Against The Machine there - first gig I went to in 1994. I did some poppers and fell over but since then... I was always trying to get Pete to go to festivals but you always said that you didn't want to go until you were playing.
Pete: Yeah, that was true.
John: I think the festivals are great. It's almost like you got a little society within itself. It's quite lawless as well.
Pete: It's not. It's hard to justify taking 150 quid of someone's money to make them wander around from one sponsored stage to another sponsored stage but occasionally if you can just unite people and have them think it's worth it, which we fully intend to do by the way.
John: I just recommend bringing your own food when you go there.

Have you talked about why you split in the first place yet?
John: It's pretty well documented.
Pete: Well not really. I never really got my side of the story out.
Carl: Here we go, can everyone get a pint and we'll sit in a circle... Have you played together since the split in 2004?
Carl: Not all of us. John wasn't there, he was in Denmark.

What would tempt you to play Scotland? How much would it take for you to get there?
Pete: I'm playing Scotland on Sunday and you're all [to other band members] welcome to come and play. There you go... 3 grand  that's what I'm getting but I'll gladly split it. You wanna play in Scotland Sunday?
Carl: No.
Pete: So it will take more than that.

If a rival festival came along on a different weekend would you do it?
Carl: I would, of course, yeah.
John: I think the Scottish fans are the best in the world.
Carl: John, that's what you say when you're in Scotland.
Pete: It's true though. It's about time we had a rubbish gig in Scotland actually.

Are you excited about the reunion?
Pete: Yeah.
Carl: Yeah, dead excited. It's something I've been dreaming about for 6 years. To get on the stage and say "We're The Libertines", and it be real, then that's the biggest euphoria. I can't wait  it's something I've wanted to do for so long.