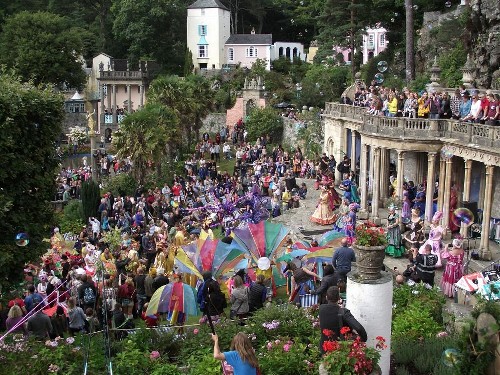 Festival No. 6 returns for a third year to Portmeirion, Wales the location for the cult 60's TV series The Prisoner, hence the name being a reference to the show.

Bands, DJs, musicians and string ensembles will be performing across the entire site, from the historic town hall to the Colonnade gardens to the picturesque Bay Stage and the promenade along the estuary of the River Dwyryd earlier in this year this time around from Thursday 4th until Sunday 7th September 2014.

Festival goers can also expect pop up-theatre, intimate readings, film screenings, woodland trails, art installations, comedy performances, pop up woodland raves, kids mischief meadow, The Prisoner reconstructions, and more. The acts will perform across the entire site, from the town hall to the Colonnade gardens, to the Estuary Stage and the promenade along the river, against a back drop of neo-classical architecture, sandy beaches and palm trees.

Information regarding the sale of day tickets will be announced in 2014.

There is also the option of paying for your tickets through the deposit / payment scheme. Pay 50% now and pay the remaining 50% of the balance by 1st March 2014. Any balance that remains unpaid after 5pm on 1st March will be deemed as a cancellation. No refunds for any loss of deposit or any amount initially paid will be made.

Festival-goers will have the chance to join long table banquets along the White Horses promenade. Billed as ‘Dinner at Clough’s’, the banquets will cost £55 (plus booking fee) and will include a sumptuous three-course meal cooked by Michelin starred Aiden Byrne and Bryn Williams, each banquet will start at 5pm and will seat up to 200 guests who will enjoy an elegant, water-side feast, sharing a mixture of communal dishes and individually plated delights by candle light.

Festival No.6 has announced the first names for its arts and culture line-up, including comedians, authors, poets, film-makers, artists, a new cinema and another new stage.

Elswhere Bez (Happy Mondays)  will host his own Question Time, where he will joined by politicians and activists. The Quietus host an afternoon stage, featuring their favourite artists talking about their secret passions including Luke Haines (Tindersticks), Stephen Morris (New Order), and Tim Burgess (The Charlatans) and an exclusive performance from Grumbling Fur. The Idler Academy will host an afternoon stage, with talks and debates from Idler founder Tom Hodkingson, Sam Lee, and more.

Also on offer to festival goers is swing dance lessons and a late night star gazing walk with astronomer Chris Lintott. Publishing House Faber bring their Academy to run taster sessions at No.6, led by Faber authors and editors.New this year are the No.6 Master Classes, including taste classes in photography, novel writing, poetry, music production, singing, wine tasting, urban sketching, philosophy and star gazing, all led by experts in their field.

Joe Duddell returns as Composer in Residence working some of the musicians at No.6 to create a series of unique, bespoke performances over the weekend.

The No.6 Carnival has been expanded to twice the size. Those who want to take part in the festival can register beforehand to get a free carnival costume.

Salon No.6 returns hosted by the founders of Salon London and Salon North - Helen Bagnall and Juliet Russell to present three days of talks and discussions on the subject of Sex, Drugs and Rock’n’Roll.

Private Eye cartoonist Tony Husband, will be hosting a cartoon confession booth in the village. Confess your sins to Tony and he’ll capture them in a personal cartoon.

New this year is the Speedlearn Late Night Cinema, curated by Finders Keepers, and the No.6 Children’s Cinema, in association with the BFI. The festival's film programme includes a special screening of 'Twin Town' and a mini cast re-union, the festival premieres of Shane Meadows' 'The Living Room' (followed by a Q&A and exclusive live set), and 'Nowhere is Home', the new film about Dexy’s Midnight Runners by Kieran Evans, followed by a Q&A with Dexys Kevin Rowlands and Jimmy Paterson. Other screenings include 'From Here to Before'. Jon Savage's new Teenage film. St Etienne will perform a live soundtrack to 'How We Used To Live', and there will be a special screening of Svengali with Jonny Owen, Vicky McClure, and Alan McGee.

This year also sees the introduction of The Secret Outlaws Camp for children, with a full weekend of kids activities from Robin Hood Games to fancy dress parties, a special afternoon kids rave and even a kids protest.

The festival's official Travel Partner - Virgin Trains, are offering 25% off Advance Standard or First Class train fares to Festival No.6.