This will be the 7th Wickerman festival, which has grown in popularity, and received an attendance of close to 18,000 in 2007.

Tickets are on sale here, priced at £75 for the two days, or £50 for just the Saturday, and campervans costing an extra £20. Children aged 12 years and under are free.

Wickerman organisers are encouraging the expanding Polish community in South West Scotland. The organisers have been successful in gaining a grant from the Council to help fund the project which will include bands from Poland in the line up.

Wickerman is also trying to break the world record for the most number of people with Mohican style haircuts in one place at one time. Scheduled to take place at 12 noon on Saturday the 26th July, the attempt will provide a colourful display of punk rock and Beckham inspired haircuts. Verification and guidelines have been sought from the Guinness World Record Management Team which describes a Mohican haircut as 'A hairstyle which is notably longer in the middle section.' Mohican prizes are being awarded in several categories including most jaunty, debonair and majestic.

The Wickerman will have both an 'Animalia' and 'Billy-Bob redneck' theme for fancy dress this year. 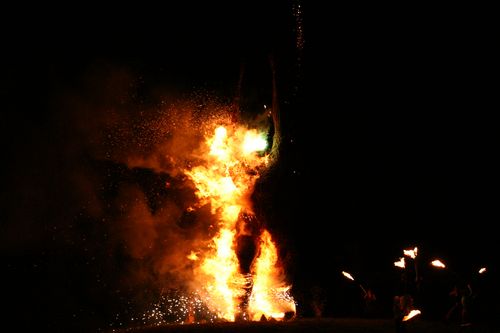