THIS EVENT HAS BEEN CANCELLED.
Sonisphere has been cancelled.

A statement from organisers says:


"It is with very heavy hearts and much regret that we announce the cancellation of Sonisphere Knebworth 2012.

"Putting the festival together in what is proving to be a very challenging year was more difficult than we anticipated and we have spent the last few months fighting hard to keep Sonisphere in the calendar. Unfortunately circumstances have dictated that we would be unable to run the festival to a standard that both the artists and that Sonisphere's audience would rightly expect.

"We want to express our deepest regrets to the artists and to thank all the staff, suppliers and contractors who worked so hard with us to try and pull off what has proven to be an impossible task and we know how much they share in our disappointment. We also want to send a huge thanks to the Sonisphere fans who stuck by us and we are so sorry that we can't fulfil what we set out to do.

"Ticket holders will automatically receive a full refund direct from their ticket agents.

After a sold out 2011, Hertfordshire's Knebworth House offers a weekend of Rock, Metal, Electro, and Punk with three days of noise for 60,000 and is confirmed as happening from Friday 6th until Sunday 8th July 2012.

The headliners are confirmed as Kiss, Queen with Adam Lambert, and Faith No More.
Also confirmed and playing their only UK shows of 2012 are Within Temptation, Evanescence, Incubus, Marilyn Manson, and The Blackout.

Other acts including The Darkness are also confirmed.

Regular campers will have access to the campsite from 12pm on the Friday, and for a small additional charge, the festival campsite will open for early campers from 3pm on the Thursday, with Bohemia village open from 6pm Thursday right through until 3am Sunday morning, for non-stop fun with white knuckle rides, dodgems, arcades, comedy, massage, bars, market stalls, and cafes to chill out in.

The general campsite has showers (payable on site) and toilets, a 24 hour breakfast cafe plus other food vendors, a 24 hour supermarket, a bar selling cold slabs of beer and cider plus staffed information tents.

The Family Campsite is specially created to give families extra facilities to make sure all members of the family have a great time, no matter what their age. The family campsite is located by the main entrance and next to Fort Knebworth. A family ticket includes unlimited access to the adventure playground during opening hours (times to be confirmed). The Family Campsite will also have its own shower and toilet block. Additionally, people buying family tickets are able to also purchase a pass for the Family Car Park which will be very close to the campsite. Family tickets must be booked in advance. 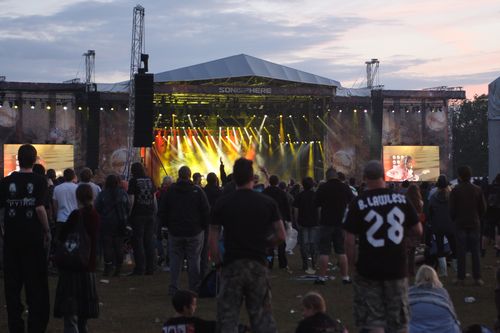