The dates for the seventh new Isle of Wight festival are confirmed as from Friday 13th - Sunday 15th June 2008.

The headliners have been confirmed, with the Kaiser Chiefs on the Friday, the Sex Pistols on the Saturday, and The Police closing the festival on the Sunday. Also confirmed are The Enemy, James, Kate Nash, Iggy And The Stooges, The Zutons, KT Tunstall, Amy MacDonald, Newton Faulkner, Starsailor, Joe Lean And The Jing Jang Jong, The Answer, One Night Only, Blackstone Cherry, and Delays - for the days for these acts please see here.

And a new addition this year is the 5,000 capacity circus style Big Top which plays host to a campers only special night on the Thursday with acts Bjorn Again and Suspiciously Elvis. Before the festival opens when 'Rock At The Big Top' will play host to bands and DJ's who will be performing throughout the weekend, including Feeder, Sugababes, The Stranglers, The Australian Pink Floyd, Scars on 45, Andy LoRusso - The Singing Chef, Hogg, Arno Carstens, Gundogs, The Duke Spirit, Curved Air, Ida Maria, Laura Critchley, The Eyes, Sondura, Wills and the Willing, Paul Newsome, Florence K, Dave Stewart, and Stone Gods.

Punk veterans The Stranglers play the Big Top on Friday 13th June. Girl group Sugababes will be there on Saturday 14th June and The Australian Pink Floyd are also billed to play on the Saturday. Welsh rockers Feeder play the Big Top on Sunday 15th June.

Away from the Main Stage, the Platform One Bandstand will feature approximately fifty acts which highlight the wealth of musical action on the Isle of Wight, including six bands playing from 6pm on the Thursday for those in the campsite.

Ray-Ban are going to be hosting the special bar area and promise DJ sets from Kate Nash, Joe Lean, Mystery Jets, Teenagers, and many more.

For foot passengers the Eco-Action Team has organised a bicycle hire scheme, run by the London Bicycle Tour Company, available from the East and West Cowes ferry terminals for travel to the site along an off road designated cycle route. The 50 available mountain bikes will be fitted with a rack and bungee straps. There is only a limited fleet this year it is best to pre-book by clicking here or bikes can be hired by the floating bridge on the East Cowes side, click on the link for hire tariffs. If there are any bikes left over there will be some available on the festival site for anyone that wants to hire them by the hour. 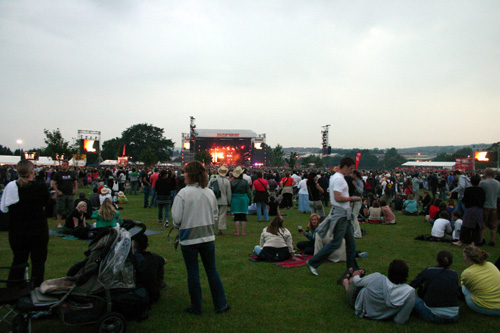