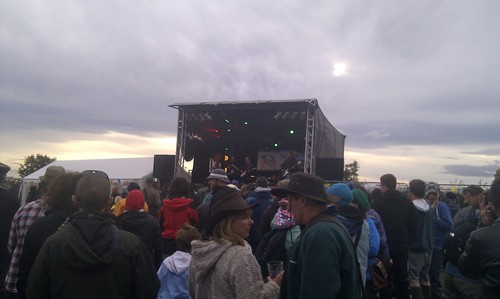 There's more than 100 fine beers and ciders all from Yorkshire (from Black Sheep Ale to Ampleforth Abbey Cider), and all the food is all finest quality, local, and mostly organic.

Expect a full programme of entertainment on five stages of music and cabaret, loads for kids to do from film making to music workshops, and all set in a rural setting overlooking the Vale of York. Music ranges from chart-topping bands to local emerging talent, ranging from pop and acoustic to jazz, blues and ska. Comedy, theatre and offbeat performances at the night cabaret, films, family camping and clean loos too.

This year sees desert pirate camel racing come to Duncombe Park which promises to be both spectacular and completely bonkers. The camel racing will take place on both the Saturday and the Sunday of the 'Pirate' themed festival weekend.

This year Galtres will be 100% cashless with a RFID payment G-Card system.

The festival doesn't let any alcohol into the arena. Small amounts may be taken into the campsites (max 6 cans per person) and strictly no glass is allowed. The event started out 8 years ago as a beer festival with the aspiration of supporting local independent breweries and cider makers, and wants to stay true to their roots. They source their own beers, ciders and wines just as they did when it was a beer festival, these are priced at £3.50/pint or 175ml fair trade wine. We also supply 4-pint carry-out kegs for the campsites.