Offering a line-up of big music names and scene setters in a world of fancy dress packed full of surprises, secret stages, fun, and rockets. The dates for the sixth Bestival, held at Robin Hill Country Park on the Isle of Wight, are Friday 11th until Sunday 13th September 2009 with a space theme, and a new layout for the festival.

Rob da Bank added, "This is The Year Of The Spectacular at Bestival  from the stupendous bands and DJs playing to an out of this world pyrotechnic spectacular called Blastival - a mad interactive trip to the moon involving me DJing off a rocket just before it fires off into the night sky on the Sunday! It's gonna be out of the world  out of space in fact!""

As well as the music, Bestival has the world's biggest fancy dress party - this year's theme has not been announced plus cocktail bars, laughter clubs, a farmers market, kids area, morris dancing, magical moments and more, as one of the most colourful events on the festival calendar. Hopefully it will have lovely weather in 2009 too.

Adult Tickets are priced at £140. Ticket holders aged 16 and 17 must be accompanied by a Ticket holding parent or guardian over the age of 21*.

Campervan Tickets are £50 (per vehicle). Your Campervan must be specially adapted for people to stay in (which does not include transit vans with a mattress in the back or 4x4s with the seats folded down). If your vehicle is longer than 7 metres you will need to purchase two Campervan Tickets. Cars will not be allowed into the Campervan area at any time so consequentially Caravans, Trailer Tents etc are not permitted.
All Tickets include camping.

This year's fancy dress theme has been announced as Out of Space, 2009: A Space Oddity, Alien!

To add to the dressing up delights at Bestival this year they will have Pimp My Outfit! Located in the Dressing Up Box there will be accessories galore available to Pimp Your Outfit.

New cosmic themed treats for this year as part of their 'Year of the Spectacular' will include 'Blastival'. A fiery spectacle unfolding over three nights, the show blends astounding pyrotechnical pleasures with stunning street theatre.

There will also be 'The After Burner', a brand new 360-degree multi-stage arena that will come alive after dark and late into the night. Centred around a 10-meter tower built from jet engine components producing various effects with fire, smoke and water, the heart of the tower is a DJ booth producing the beat for the effects to synchronize to the mayhem!

Bestival organisers have confirmed that any bus strike will not effect the festival shuttle buses, which will be unaffected throughout the festival by any strike. 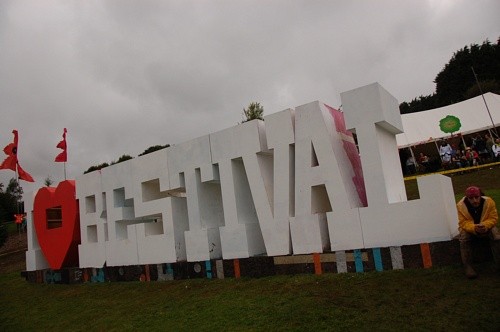