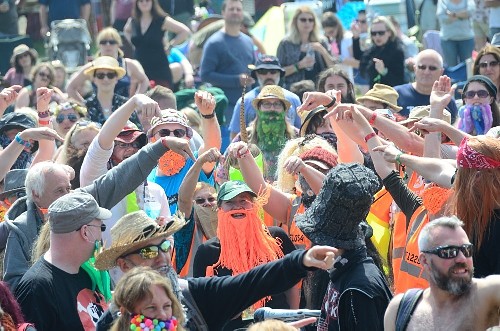 With my usual bank holiday festival Strummercamp taking a well earned breather this year, the first festival that could even come close was Derbyshire's Bearded Theory This small festival is like a smaller Beautiful Days and much closer to us in the North. Plus what a weekend for it! Not a drop of rain, I can't remember that at a festival for, well, I can't remember! 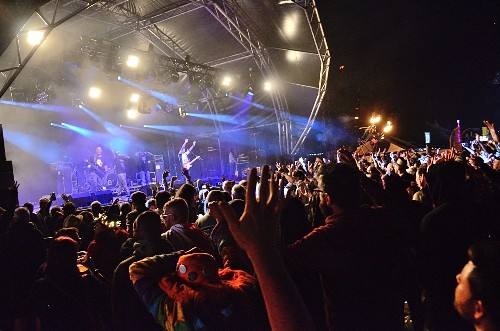 The line up was obviously a big draw for this year. Arrested Development would have gone down a treat in this sunshine, but Squeeze and Asian Dub Foundation (who swapped set times) were more than suitable! The Levellers were the perfect headliners for Friday, Public Image Ltd. (PiL) were good for the Saturday headline slot, although I must say that Wilko Johnson (on earlier that afternoon) was just as good. There were so many great bands, from The Roughneck Riot, Terrorvision, Killing Joke, Cockney Rejects, Mad Dog Mcrea, and Bad Manners on the Pallet (main) stage. Moving to the “Octopus tent” Maui Waui the Electric Swing Circus, Band of Fools, The Dirty Folkers, Jenova Collective, Barbarella's Bang Bang, and Gypsy Hill are amongst the line up in this cool tent. 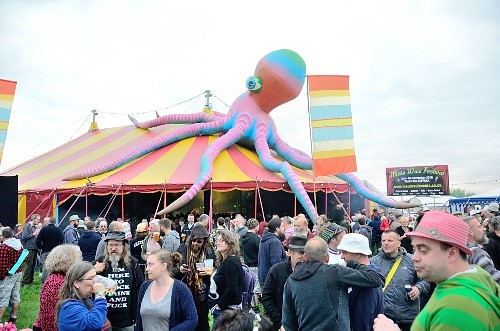 The Magical Sounds tent was full of glow in the dark eye gubbins and psy-trance, plus Strontium Dogs, Juno Reactor, and OTT & The All Seeing Eye. The Woodlands is a lovely wooded area with more folk and punk with Turin Brakes, Jack Savoretti, and Stiff Little Fingers headlining, with highlights being Wonk Unit, Attila the Stockbroker, The Bar-Steward Sons of Val Doonican, The Filaments and of course Mr. Motivator taking the first slot (which I was gutted we missed as we thought it was on the Sunday). We also missed the Red Barrows... the stunt display team with wheel barrows. The lesson here is buy a program straight away kids! Not included in the more portable smaller program though was the Convoy Cabaret tent, which was a great place for ska and punk amongst other music types from 4pm daily and hosted the likes of Captain Hotknives, and Captain Grimace and Chasing Whiskey (the Bearded Lady band) until 3am Friday and Saturday. There was a midnight curfew on the Sunday, and Beans on Toast had the only slot in the sound den of the Woodlands to finish off the festival at 11pm until midnight. The Something Else Tea Tent played host folk acts throughout the weekend.

Bearded Theory is just as much for the kids as the bigger kids. To fight the idea that parents get fined for their kids having unauthorised absence from education during term time, the festival holds a free day of schooling on the Friday, run by volunteers led by Sally Booth. Pre-schoolers were educated with the Gruffalo in a forest school. Parents can leave their older kids during 'school time' or get involved. Those up to Year 5 had classes in English, bushcraft, maths, can can, football, mindfulness, science and history. Places were capped at 250 in advance but this raised to 350, and there was still a waiting list proving how popular it was! Special Education Needs children were also well looked after with 24 supported over the weekend. Such a great idea that should catch on to other festivals. Even Mr Motivator gives the kids a PE lesson. One of our little friends tells us it was tiring, which makes us feel better about our gym sessions! Trolley Tots hire out trolleys for families to carry kids and kit around all weekend for £42.00 plus deposit.

Teens in Years 6-10 were also catered for. Adjoining to the Children's Village is The Rogues Hideout. There are jam sessions to join in with, DJ workshops, beatboxing and loop pedal workshops, and graffiti demos and workshops and event management lessons. There's the Rogues Outlet to recharge yourself with snacks and your extra limb (your phone if you're a teenager). The signal is pretty good here as the festival is so small so we don't fight for reception.

There are a handful of rides including a big swing, Hall of Mirrors and a synchronised row of bucking broncos. For a nice chill out and rest the Earth Area is full of handmade wicker sculptures and has craft classes in willow weaving, coppersmithing and felting. The Nozbug workshop lets you attempt metalworking to make your own bug, and there's a drop-in clay workshop. Tribal Vibes Drumming will help you find your beat with Djembe bongos and prepare you to play every afternoon in the TR!BE drum circle. Healing covers a huge range of areas here too, including deep massage, shiatsu, Indian head massage, reflexology, intuitive massage, Hatha yoga and singing and hugging workshops. 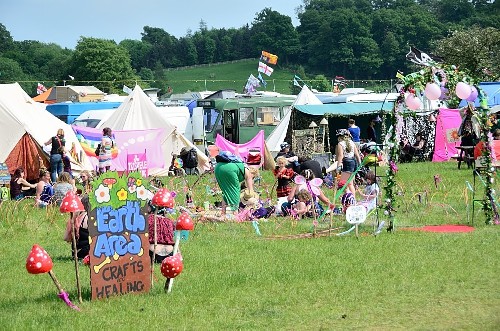 I love how compact this festival is. The “Trent” campervan fields are just next to the arena, as are the usual camping areas (“Catton” and “Walton Wood”) and a few tipis and yurts were available for £35 in advance. The car park is only a 10-minute walk from the campsite. Disabled camping is right next to the arena, and cars can stay with your tent in these fields. Family/quiet camping is near the public entrance. Non of these areas are at all cramped, which is nice for a festival too. The toilets are cleaned throughout the day, with loo roll only seeming to run out late at night. There are plenty of water points, near the only puddles of the weekend. Maybe adding the odd sign to let the fellas know the green boxes next to the portaloos in the arena are urinals would be an idea for next time, as many stand with us ladies in the queues when there was no need to. The site is very clean, again some signs would help if there were recycling bins or general waste, as the bins had different lids on but we were not sure if some was for recycling of not. There's free to use showers around the camping fields, proving that festivals don't need to charge people for them. There are lockers, a charging stall, a campsite shop and ATMs situated in the arena also.

The gate opening times mean we cannot go on the Thursday night as 8pm is a little rushed for many folks to get there after work (even though the site is centrally placed at about 2.5 hours from most of the UK population). The car park and campervan (advance only) tickets are reasonably priced at £12.50 and £35, and the ticket itself at under £100 for an adult/£50 for a teen and £20 for a child over 5 was a bargain for this line up alone. The festival has sold out for five years in a row, says it all really.

There are three bars to choose from in the arena, all featuring drinks from the award winning Thornbridge Brewery situated in nearby Bakewell. The drinks are real ales, ciders, wines, lagers, spirits and all at pub prices. You can bring your own drinks into the arena but the bars are also doing very well all weekend. Nowt like a cold brew. The selection of food rangers from burgers to pizza to fish and chips to vegetarian to Indian with Chinese, Italian, Caribbean, pies, Mexican, Tibetan and Sunday roasts. The latter was from Nanas Kitchen in the Woodlands, and they sold out of many items briefly on the Saturday. 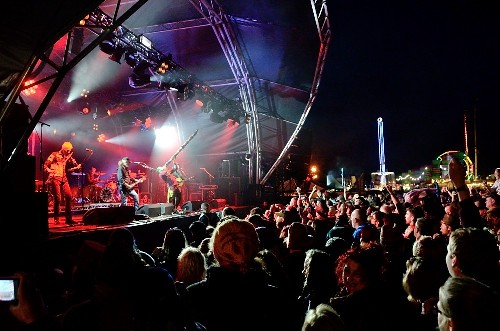 Unfortunately a meal will cost you around £7, which may be the average festival mean price but it's still a lot for not very much. The pasta stall reduced its prices to £5 for a meal so this was too good an opportunity to miss. The chicken wrap from the BBQ stall was very small, the 6 randomly added french fries didn't bulk it out much and the service was not great from the toastie and panini stall (being ignored for ages when I have a fiver to spend anywhere is not wise). Milkshakes were great during the sunny afternoons, with a choice of most of the chocolate bars you can think of mixed in. The full curry deal with nann bread, samosa, salad… all the trimmings may appear a lot for a tenner but it sure was filling and a nice Sunday (read that as last day) treat.

Each evening there is a campfire near the Earth Area, a nice place to chill and meet new friends. The hot dry clear sky days have lead to some cold nights so this is a welcome pit stop on route back to the tent. The wooden high backed benches also trap the heat in for the lucky ones near the pit.

Of course, with a name like it has it's all about the beards on the Sunday. The World Record Attempt for largest number of beards leads to an audience vote for a winner. We can only manage to wear our itchy woolen beards for about an hour in total before we give in, pathetic really as they took me about 12 hours to make. Ah well! The fancy dress theme for the Sunday is Stars In Their Eyes, meaning a lot of singers and performers are about, like Michael Jackson, Amy Winehouse, Freddy Mercury (with a real vacuum cleaner) and Dolly Parton.

As with many festivals these days its the folk that go that make or break it. The folk here are a damn friendly bunch, we don't meet any trouble causers, there's very little security presence needed, and kids old and young are having a great time. Even long days in the sun drinking all day does not lead to any bad behaviour. If my festival heart did not lie with Strummercamp I would be back here next year in a shot.