WOMAD stands for World of Music, Arts and Dance, bringing together many forms of music, arts and dance from countries and cultures around the world.

The festival is again at its new (in 2007) site at Charlton Park, near Malmesbury in Wiltshire. The dates are confirmed as Friday 25th to Sunday 27th July - fingers crossed for better weather in 2008!

On Thursday for 'early bird' ticket holders The Open Air Stage plays host to the Adrian Sherwood and On U Sound System Showcase from 7-11pm and guests will include Lee 'Scratch' Perry, and Little Axe aka Skip McDonald.

On Friday grab your partners by the hand for a night of Irish Ceilidh in the Siam Tent from 11pm  1am with guests Sharon Shannon, Damien Dempsey, and Shane MacGowan.

The WOMAD festival outdoor stage will present a ninety minute Gala Finale on the Sunday from 9.30pm until 11pm presented by Bill Cobham with Bassekou Kouyate as a main soloist and many guest artists.

The full line-up features around 100 artists from 40 countries performing over the festival weekend. There's also a full programme of adult and childrens workshops (limited spaces available - turn up early!), the cabaret tent, comedy, DJ sessions and live performance in the late night 'CLUB WOMAD', as well the normal festie fodder, and a huge market of world crafts.

Full tickets are on sale priced at £125 for the three days, or available at £100 for those who purchased a ticket in 2007. Campervans cost £25. Camping from Friday to Monday is included in the ticket price - if you wish to camp on the Thursday there's an extra charge of £10. To buy tickets, click here.

WOMAD have published 'de-brief document' (here in which they acknowledge the difficulties encountered by all those at this summer's event due to the muddy conditions, which mostly came about due to about an inch of unexpected rain on the Thursday, and led to conditions on the festival site to deteriorate rapidly that day. Improvements are planned for 2008 so that the same difficulties aren't encountered should the weather be as awful next year (which it won't be, fingers crossed!).

Returning to WOMAD this year is the 'In Conversation Sessions' - a series that made its debut at WOMAD Charlton Park last year. It is an opportunity to learn more about some of the artists at WOMAD, who'll be chatting informally with their host about their lives and their music: David D'Or, Damien Dempsey, Celso Alvin from Monobloco and members of Siyaya are just a few of the artists confirmed so far.

WOMAD's famous Global Village offers a dizzying choice of food, and this year there are some new eateries and drinkeries to check out including: the Hurly Burly Cabaret Café showcasing some weird and wacky performers; San Fran's Disco Cocktail Bar where you can sip a mojito; and the Real Ale Bar.

In the leafy arboretum the 'World Of Wellbeing' will be offering twice-daily Qi Gong sessions, outdoor yoga, an English tea garden and a sushi restaurant located in a Mongolian yurt. There will also be the WOMAD Spa - where festival goers can rest, shower and chill; use make-up mirrors, hairdryers and fluffy towels.

WOMAD festivals are held all over the world, and allow audiences to gain an insight into cultures other than their own through the enjoyment of music. WOMAD aims to excite, to inform, and to create awareness of the worth and potential of a multicultural society. It has a friendly and family-safe atmosphere, as well as fantastic music from all around the globe. 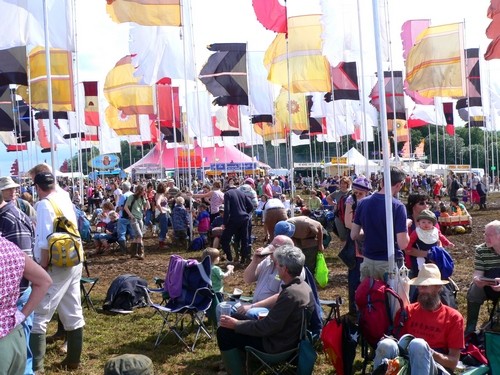