This year Rock Werchter will open three campsites for Festival goers on the Wednesday, to cut down on congestion in Werchter and minimize inconvenience for the locals. The festival organisers will not be putting on entertainment on Wednesday evening, but the campsites will have food and drinks available.

The Campsite xl ticket enables festival attendees to stay at campsites A2, A3 and A4 in the Haacht zone as from Wednesday June 29 at 4 PM. The ticket remains valid until Monday July 4 at noon. Please do keep in mind that only these 3 campsites will open on Wednesday, so the availability of campsite tickets xl tickets is limited. Campsite xl tickets are priced at around 25 Euros in advance.

The line-up is usually well worth the trek, and the campsites are clean if a little noisy (a good festival really then). Like nearby festival Pukkelpop standard local bus and train travel are free with your festival ticket. Food and drinks are bought using a ticket system. The camping areas are around a ten minute walk away from the festival site, but they have clean showers for around two euros. For those who like to take in the sites Leaven has many beautful historic buildings and is home to the Stella Artois Brewery.

There are two stages and the area is pretty clean, as the organisers have an incentive to litter picking. 20 used cups gets you a small (the only size they do) cup of beer or water. There is no drinking water available from the taps so it is best to take some along.

A total of thirteen campsites are available at various points along the road to the arena entrance, which has been closed to vehicles. Most of the first ones are full by Thursday afternoon.

In Belgium, it is strictly prohibited to sell alcohol to minors under 16. So the festival is not serving any beer to kids under 16. Festival-goers are encouraged to carry some ID. If a staff member at the bar has some doubts about the age of someone who wants to get a beer, he or she can ask this person to produce some proof of age. 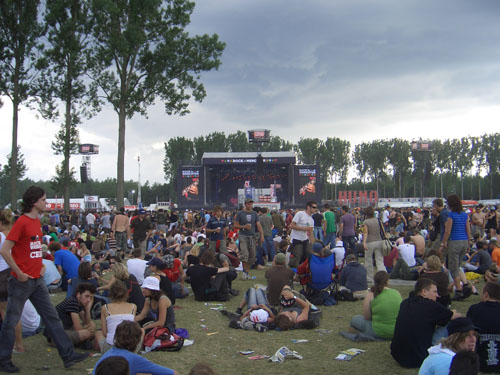