The family friendly Camp Bestival which offers a wealth of entertainment alongside the music, returns in 2017 from Thursday 27th  to Sunday 30th July at the picturesque setting of Lulworth Castle, set against the backdrop of England's dramatic Jurassic coastline in Dorset.

Please see the Camp Bestival line-up for all of the details announced so far including day & stage splits.

There will be a full programme of music over multiple stages, plus other entertainment including comedy, arts & crafts, spoken word, dance, and more.

There will also be a mix of theatre, shows, attractions, activities, poets, authors and talks for all the family.

Camping Plus offers a reserved camping plot sized 5m x 7m pitch and has its own dedicated car park and entrance, with very easy access to showers, loos and a café. Camping Plus plots will be available at a later date (max of 2 adults and 4 children per plot).

There will be loads of entertainment for kids including Justin Fletcher aka Mr Tumble, the return of Historic Royal Palaces’ Tudors on Tour, TV's Dick & Dom, who will be making an exclusive main stage appearance and hosting the Silent Disco, and DJ BBQ will host The Feast Collective. Plus fun stuff including a Giant Kids’ Disco with the World’s Largest Disco Ball,and the inaugural UK Festival Air Guitar Championships.

The Den is a whole area of Camp Bestival dedicated solely to 13 – 17 year-olds, it’s kind of a festival within a festival, with new and emerging talent, workshops, talks, Q&As, and more.

The Hideaway is the wellness retreat and spa, dedicated to finding a little slice of inner peace in the middle of Camp Bestival’s joyous hullabaloo. 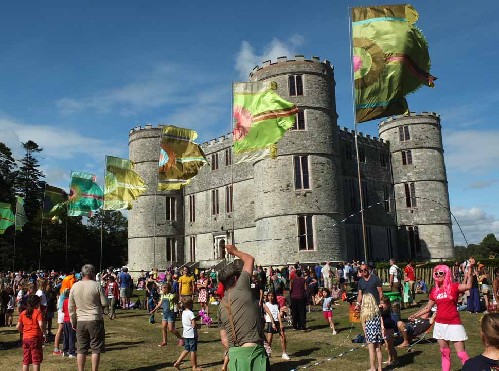