Now in its fourth year the festival will offer an array of music, theatre, comedy and art. BoomTown Fair is a music, arts and family festival that takes place at Matterley Bowl, nr. Winchester, Hampshire, from Thursday 9th until Sunday 12th August 2012.

The main stage line-up will consist of ska and party bands from around the world, with the other live music stages offering cabaret, gypsy, folk, reggae, dub and country and western. Plus loads of cabaret, comedy, spoken word, a range of stages, an anarchist theatre, lots of site art and many areas to explore with plenty of catering options, all the normal facilities you'd expect at a festival and a massive emphasis on eco-friendly initiatives. All attendees are encouraged to dress up in fancy dress, the fancier the better!

Even though the festival is officially sold out, any unclaimed tickets from the deposit scheme will be re-released at shortly after Midday on Friday 20th July (estimated at around 500 tickets).

BoomTown will have a specially designated family campsite with showers, toilets, etc. There will also be a kiddies area with its own area and reception for babies, toddlers and children up to 12. The area is programmed with creative workshops, and has a chill out space for parents, and games.

Boomtown Fair's fancy dress theme will be 'Outer Space!'. With the mothership Arcadia crash landing onsite, strange creatures infesting the surrounding woodlands and mutated vehicles patrolling the landscape, this year the aliens will be walking among the crowds.

This year there will be 15 new venues springing up across the various streets of BoomTown: hidden deep in the underbelly of Downtown, propping up the rickety walls of Oldtown and gracing the marbled streets of May-fair Avenue, each just waiting with a whole array of new secret shenanigans to be uncovered, plus attractions and adventures.

The town committee have been given the go ahead to expand the city into a huge luscious new area for more camping, with access to the town being only a short walk along the beautiful wooded walkway. The ever growing craft and healing field has also expanded this year with new additions including saunas, hot tubs, psytrance and chillout areas.

The festival is offering the chance for Boomtowners to create their own neighbourhood in the suburban campsite districts. Each 'hood will have its own theme, provide a service and create a space for the greater community. These could include a workshop, activity or a crazy interactive invention. The best 'hood will win a prize. Only the best ideas will be given the go ahead for more details please visit the website.

Boomtown also launched the Boomfactor competition for emerging talent offering the winner a chance to perform on the Main Stage at the festival, with runners up performing on one of the smaller stages. Entry was free. A shortlist was then put to the public vote, before competing in heats, and a battle of the bands style final.

Set in the leafed canopy of the surrounding woodland tucked away from the chaos, this stage will present some of the finest live dub and reggae bands.

Bearded Kitten return to host a plethora of lawn-based mischief all day in their brand new outdoor arena and the very first branch of the Boomtown bank! Expect array of financial fun, games, activities and general silliness followed by late-night knees-ups in their Gentleman's parlour.

To keep the site free from litter, Boomtown are launching a new eco bond initiative to help keep the streets of BoomTown tidy. Ticket purchasers will be asked to pay an additional £5 eco bond deposit. On arrival at the festival attendees will be given a 'boomtown eco bag'. Organisers ask everyone to fill this bag with all their rubbish and hand it back into one of the drop off points for recycling, and have their £5 deposit returned.

Boomtowners can purchase a BoomTown cup - and receive a reduction on drinks when it's used at the bar.

This year sees Boomtown once again open its gates on a Thursday for festival goers to get their Boomtown bearings whilst enjoying a light sprinkling of musical entertainment in a selection of the smaller venues on the outskirts of the town. 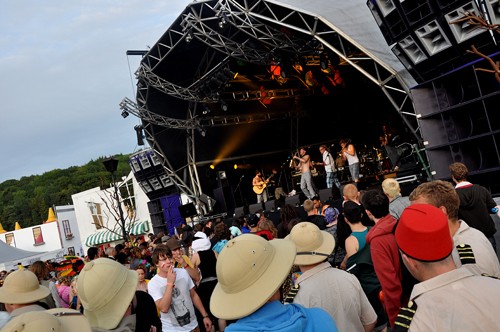