Offering a line-up of big music names and scene setters and a 'Summer of Love' themed fancy dress world, packed full of surprises, secret stages, colour and fun. Bestival is held at Robin Hill Country Park on the Isle of Wight, from Thursday 10th until Sunday 13th September 2015.

David Rodigan has become a lifetime resident for Bestival and Camp Bestival.

As well as the music, Bestival has the world's biggest fancy dress party for 80,000 festival goers - Bestival offers cocktail bars, laughter clubs, a farmers market, kids area, morris dancing, magical moments, illuminated night parades, and more, as one of the most colourful events on the festival calendar.

There's a new arena for 2015 at Bestival dedicated to energising pursuits, from wild music runs and hugging Karma Llamas to euphoric yoga and rock climbing, Slow Motion is it’s own relaxed festival within a festival offering Surf lessons, mountain-boarding, coasteering, rock climbing, paddle-boarding and mountain biking, and a chance to take in the sights with a trip on our brand new Caravanserai inspired Land Train.

Another new attraction this year is Carnivale situated in the Wishing Tree Field. Featuring a pirate ship stage with a cast of oddball performers and dancers expect sea shanties, morning shakedowns and eye-catching exploits, Commedia Dell’Arte inspired pirates, acrobatic monkeys, and a Carnival Day Parade and Night Parades. Plus, there’s a workshop tent offering carnival arts, costume making, face painting, dance and musical workshops. There will also be a History of Carnival exhibition showing film footage of carnivals from around the world and discover the history of the costumes on display.

Also a new area, The Commune, is an ocular spectacular featuring the Flower of Fire, a nine-petalled 15 and half metre pyro-installation radiating peace and love from the centre of the Magic Meadow all weekend long. The Commune is designed by Josie da Bank and programmed by Lost & Found’s chief facilitator Bobby Lost. Situated among a convoy of peace wagons and bespoke traveller vehicles, there will be an array of Happy-nings, from sober morning raves and late night UV underwear parties, to talks from real revolutionaries, capturing the genuine counter culture spirit of freedom and the expansion-of-possibility felt by the movement in the sixties. 'Happynings' will include, 'Love in' Cuddle Workshops, Laughter Yoga, Blindfolded Ecstatic Dances, Silent Speed Dating, Sacred Cacao Ceremonies, Drum Circles, Acro-Yoga, Singing from the Heart, 'Guerrilla Good Guys' - a workshop to spread love around the festival unseen, free expression and dance with the Hare Krishnas, Gratitude Workshops and the Love Stop Cafe.

At night The Commune will pulse with passionate beats from top conscious DJs from the conscious clubbing scene like WeAreOne, Morning Gloryville, Right Here Right Now and Battersea Conscious Club, spinning heartful house and dharma disco. Each night will see ‘Glow Show’ - a dare to bare UV underwear and body painting tribal party. Plus there will be the Talking Stick Tipi with game changing talks on consciousness, revolution, freedom, connection, expression, rebellion and politics.

Bestival is trying to enter the record books again this year, this time with the largest number of buskers in one place, led by CoCo and the Butterfields over four hundred buskers must gather in the main arena, for a mass rendition of 'The Beatles' All You Need Is Love'. Would-be record breakers are invited to bring any instrument they like, and help create a world record breaking biggest busk ever. All they need to do is sign-up using the form on the official website and say what instrument they be playing.

Films in the Forest

Films in the Forest kicks off on Friday with Woodstock, and Pride. Saturday's films are Behind the Candelabra, and Eternal Sunshine of the Spotless Mind. On Sunday the programmer features Searching for Sugarman, and High Fidelity. 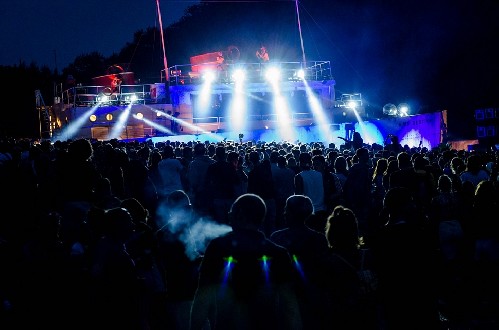