Offering a line-up of big music names and scene setters in a world fancy dress, packed full of surprises, secret stages, colour and fun. The dates for the 'Wildlife themed' ninth Bestival, held at Robin Hill Country Park on the Isle of Wight, are Thursday 6th until Sunday 9th September 2012.

Tickets have sold out again this year. Posh camping is still available priced at £299. Tickets including entry from Thursday 6th September were priced at £180 for Adult Tickets and £120 for Teen (age 13-17) Tickets. For those arriving on or after Friday 7th September Adult Tickets are priced at £170 or £110 for Teen (age 13-17) Tickets. Tickets for children (age 12 & under) are free (but must have a ticket).

Parking tickets are priced at £10. Campervan Tickets were priced at £85 (per vehicle) and have sold out. Your Campervan must be specially adapted for people to stay in (which does not include transit vans with a mattress in the back or 4x4s with the seats folded down). If your vehicle is longer than 7 metres you will need to purchase two Campervan Tickets. Cars will not be allowed into the Campervan area at any time so consequentially Caravans, Trailer Tents etc are not permitted.

Bestival has also brought in stricter rules for those attending with teens. Ticket buyers are asked to note that adult tickets can only be used by persons age 18 or over. Teen tickets can only be purchased by persons over the age of 30. Purchasers of a child ticket or a teen ticket must be either the parent or legal guardian of the teen or child for whom the ticket is purchased. Child and teen ticket holders can only enter the festival with the person who purchased their ticket i.e. their parent or legal guardian.

This year the festival has also announced 'Barter for Bestival', where those who can't afford a ticket, can barter themselves for a few hours to help with an IOW charity legacy project in exchange for a free Bestival ticket. This year 50 people will get the opportunity to help create a community allotment space working with Natural Enterprise. Applications will open on 20th February when full details will be announced.

As well as the music, Bestival has the world's biggest fancy dress party for 50,000 festival goers - this year's theme is Wildlife, Bestival offers cocktail bars, laughter clubs, a farmers market, kids area, morris dancing, magical moments and more, as one of the most colourful events on the festival calendar.

New for 2012 is the 'Lost Picture Show'  a vintage cinema to take you back to the golden age of movie going, and Rob da Bank will be rescoring the 1930s original of 'King Kong' at the brand new 'Amphitheatre' performance space in the Woods with more film collaborations to be announced soon.

The Healing Area expands this year to become a 'Soul Park' featuring spaces for yoga, massage, relaxation, hammocks and meditation with the David Lynch Foundation plus wood-burning Scandinavian hot tubs and a sauna area.

Also new for 2012 is Arcadia's brand new structure their 'Mechanical Cabaret'  not content with having invented the crazy mechanical spider that spits flames and has added wow factor to the last few Bestis, Arcadia have now trawled the world for brand new structures and insane fire art to wow us with, much of it from Burning Man.

'The Bollywood Bar' will get a complete Josie da Bank makeover  with an old London bus being transformed into a Bollywood chill out bar in full Indian colours and the inside getting a cinematic Bollywood lick of paint.

The festival also expands again this year offering even more camping space  capacity won't be expanding but there will be more space to throw up your tent, not tat you'll be using it much.

Bestival are also inviting festi-goers to get creative and form their own bloco and be part of 'Bestival Carnival Parade' on Saturday afternoon and are hoping for fabulous costumes, drumming, dancing and giant puppets.

This year there's also the chance to 'Cycle To Bestival' festival goers can emulate Mark Cavendish with a truly Olympic effort to ride almost 100miles from Central London to Bestival and raise cash for charity. More details will be available at the end of the month.

Organiser Rob da Bank also brings his 'Music Club' to Bestival. The project, set up in partnership with the Isle of Wight Youth Trust, is coming to Robin Hill to offer up a brilliant selection music and arts workshops for youngsters to discover if they're a rock star in the making. 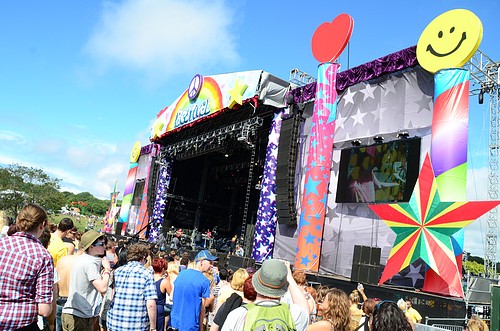