the new Bearded Theory meets with approval on the opening day 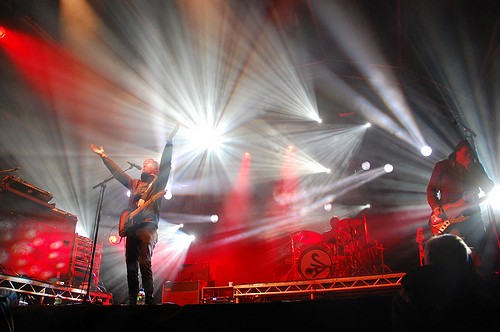 As we leave the main road onto the new Bearded Theory site for 2011, we're reassured by signs on the drive through the woodland that we are 'Nearly there', and that 'There's nothing to see here'. As we emerge from the woodland, lambs bounce around and the spectacular Kedleston Hall comes into view on the other side of a small valley.

There are no queues to get on site, parking is simple, getting wrist bands presents no problem at all and we're quickly en route to the camp site. Heavily laden, we soon find friends (how did this work in the days before mobile phones) and make ourselves comfortable for the weekend on the lawn.

This is our first festival of the year so catching up with our festival friends, sorely missed over a long cold winter is the order of the day as we make our way into the main arena and into the beer tent. The choice of real ale is limited to two. I opt for the Griffin Ale. It's OK, nothing special and in all honesty, I'd hoped for a better selection. The last time I attended Bearded Theory was 2008 and the selection there was amazing. Not deterred, we attempt to investigate the rest of the site but keep bumping into people on their way to the beer tent so we try the Nymph ale too. The difference between the two ales doesn't warrant a 20p price gap (I struggle to tell them apart), so I opt for the cheaper one. Neither is particularly great but both are clear and don't look like they will do me any harm.

Eventually, we begin our exploration. There aren't many festivals where the main stage sits on a lawn, mown in stripes with what seems to be pinpoint precision. The grounds seem very well kept and despite 3500 public tickets and 500 staff over the weekend, the grounds remain pristine. Testimony to punters using bins (it sounds simple doesn't it but check out the floor at some festival sites), and litter pickers working tirelessly throughout the weekend.

Again exploration doesn't take us too far but the circular traders area is pretty well set out. Food and 'shopping' stalls intermingled.

Attila the Stockbroker's poetry and rhythm filled rhymes are an absolute joy. The emotional rollercoaster of 'The Long Goodbye', dedicated to his mother who died last year after a six year battle with Alzheimers. The mood lifts with renditions of 'Punk Night at the Ducks Nuts' and 'Spirit of the Age'.

Musically, the highlights for me are a very energetic set from Sonic Boom Six. Not my normal cup of tea but their bounciness smiles and catchy tunes are pretty infectious.

A storming line-up of acid techno in the dance tent takes me back to the mid 90's with D.A.V.E. The Drummer (also from Back To The Planet), and Chris Liberator. These guys were both big on the free party scene and regular fixtures around Brixton clubs. Their addition to the line-up is really what convinced me to come and I wasn't disappointed. Two sets of acid techno with warbling baselines, punchy drum beats and 303 squelches backed by acid samples.

Musically, the night is rounded off nicely with a stomping hard dance act. DJ X from Lab 4. Harder and faster than Lab 4 but a great end to the evening and after attempting to remain smiley while Athlete were playing, (and failing), a sure fire way to regain the grin.

After a few hours of seeking fire and feeling the cold, chatting and tuition about the English civil war, we decide to hit the hay. Not before seeing ice on tents and car windscreens. The temperature has dropped to a chilly -2 degrees! 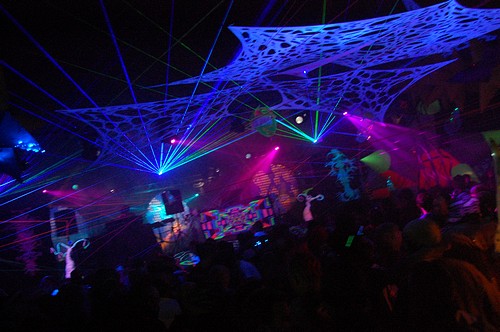