- a sea of pink on Sunday 14th August 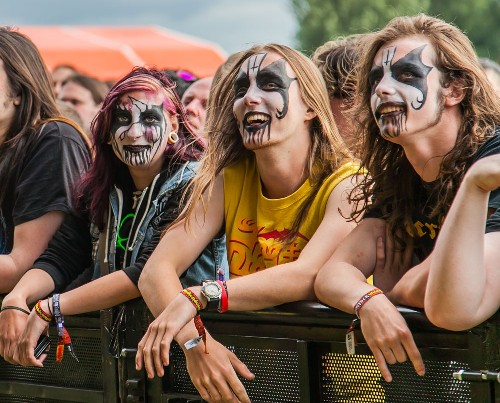 Bloodstock is taking a moment this year, to celebrate and elevate the work of an amazing woman, the pioneering fundraiser & educator who established The Sophie Lancaster Foundation. On 12th April 2022 Dr Sylvia Lancaster OBE passed away in hospital after a short illness.

Bloodstock set up The Sophie Lancaster Stage in 2009, in tribute to Sophie, a 20 year old girl who was brutally attacked along with her boyfriend in 2007 while walking through their local park in Bacup, Lancashire. Sophie and her boyfriend were singled out, not for anything they had said or done, but simply because they looked and dressed differently. Unfortunately, Sophie later died in hospital following the injuries from this vicious and unprovoked attack.

Sophie’s family later set up The Sophie Lancaster Foundation to promote tolerance and acceptance for others, campaigning against hate crime, through education and training to professionals to raise awareness of the prejudice and violence faced by people from alternative subcultures. Sylvia Lancaster was pivotal in changing the definition of alternative subcultures – a definition that proved vital in incorporating attacks like that upon her daughter, to be classified as a hate crime. .

Festivals are a key part of the Foundation’s year. The charity attends Rebellion, Bloodstock and Download festivals as well as other music events, embracing the opportunity to meet supporters as well as the opportunity to continue raising awareness. Music has always been important to the charity and bands from the very beginning, have dedicated songs to Sophie and showcased the Foundation through their support.

Bloodstock aims to further inclusion within the bands it approaches for the Sophie Lancaster Stage whether these are emerging bands of tomorrow or bands from countries who find it increasingly difficult to be seen on a major scale.

Sylvia Lancaster, as well as being Sophie's mum was well known by many Bloodstock regulars. At Sylvia's funeral earlier this year, she had requested that everyone attending wear something pink, as this was her favourite colour.

So in honour of Sylvia, at this year's festival on the Sunday, the festival organisers are mirroring this sentiment and asking Bloodstockers to wear an item of pink in acknowledgement of her work, which has been life changing for so many in alternative subcultures.

Perhaps you'd like to don a pink shirt or hat, or maybe plump for a full pink outfit!  It is hoped that there will be a sea of pink for Sylvia on Sunday. Maybe drop by The Sophie Lancaster Foundation stand in the arena and make a donation if you can.