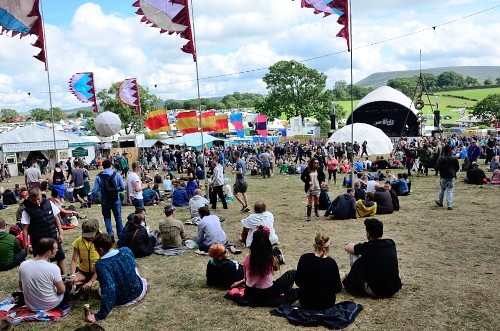 Over there, in a corner of this field, Elvis is chatting with Dame Edna Everage as if they're lifelong friends. And over there, a group of elderly pensioners are being treated by the emergency services, perhaps because they've been having a chew on the giant ecstasy pill that dances around in another corner. I turn around just in time to see an Eskimo climb aboard an Eddie Stobart lorry. I pinch myself. This is not a vivid dream or a sign that I have finally drifted over the edge into a much-threatened madness. But rather, this is Saturday afternoon at the tenth anniversary Beat-Herder party. Fancy dress is in full flow and this years theme is the letter 'E'.

People put a ton of effort into their Beat-Herder costumes. They're rewarded back by a festival that puts a ton of effort into providing three days that are difficult to beat. Any festival that has Basement Jaxx, the Parov Stelar band, and Leftfield as its headliners is clearly going to impress but that's only scratching the surface of the offer here. More than a dozen stages, all brimming with quirky quality; new things to see and explore each year; a range of food that tempts (those scotch eggs with black pudding were a taste sensation) and a crowd of smiling, friendly people so up for a party that it genuinely hurts like hell when Monday morning inevitably comes around, not because I'm hungover (I am) but because the sense of sadness that this isn't happening again for another year is huge. 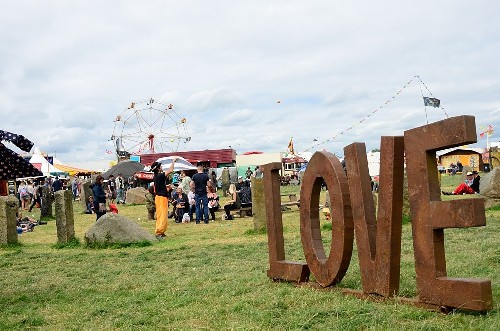 We should start with the new. It's a very good place to start. Over in the corner of the site, where the techno and hardcore-heavy wooden Fortress looms large, there's a new tent in town, the Jagerhaus. Wander down a path and through a clearing in the hedge and you can enter this dual-levelled space. An advert for Jägermeister, it's a surprise to see such blatant product placement at a festival that has typically shied away from such commercial spin. Indeed, there's no mention of this venue in the stage round-up at the front of the (always excellent) programme so I wonder if this was a case of paying some bills. The Friday night line up here though is top-notch. It's great to see  Stealing Sheep enchant with their seductive melodies before, later in the evening, Raf Daddy from The 2 Bears encourages us all to discover hidden dance moves. Such a shame that for much of this opening evening at the Jagerhaus, the upstairs is cordoned off for a private party.. A private party at Beat-Herder? What nonsense.

The very last thing that Beat-Herder is (or needs to become) is an exclusive party for people who know somebody who once knew somebody who once served a beer at a bar here. And, aside from the Jagerhaus, it shows absolutely no sign of losing the all-inclusive friendliness that makes this one of my favourite festivals of the season. In recent years, the Trailer Trash area appeared to have lost its mojo a little. So, it's great to see that it's had a mighty revamp in 2015. Trailer Trash has become Trash Manor and now, throughout the weekend, people pass between the stone pillars that mark the entrance to the courtyard of this country home and dance together to the broad church of treats on offer. When Greg Wilson does his fantastic DJ stuff to close this area on the Sunday evening, the organisers are surely patting themselves on their collective backs for the renovation that's gone on in Trash Manor. 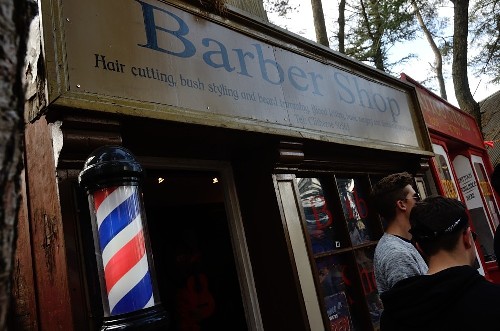 Saturday afternoon and I'm having a wander up Beat-Herder's street. For the uninitiated, this is no ordinary street. It's hard to know where fiction meets with reality amidst these surrounds. With buildings that are year round fixtures, here you can dance in the aisles of the parish church of Beat-Herder shire or get a distinctive (and permanent) Beat Herder tattoo. My hair is annoying me and so I flop into the barbers shop. I pick up a copy of the Sun whilst waiting and wonder if the front pages have been doctored for effect. Surely it can't be the case that the Queen once raised her arm in Nazi salute? The haircut I receive is a stunner, perfectly sheared by a barber from Barnsley who charges me just £10 for the privilege.

On leaving the barbers, I notice a hidden alley between this shop and the 'Hotel California'. A sign points towards the swimming pool. New for the festival last year, I'd not been able to find it and now I had my chance. But, apart from my dazzling new haircut and neatly trimmed beard, I'm hideously underprepared for such an adventure. "You might as well do it in your white pants", says the demon in my head and, before I have chance to argue, I'm walking down the path and stripping off in a neat wooden cubicle. The covered pool isn't massive but it's fabulous. I delicately plop myself into it and play beach ball games with some lads from Manchester who are waiting for their drugs to kick in. "You look like you're auditioning for some gay porn film in those wet kaks", shouts one as I sit on the side of the pool. I decide it's probably time to leave and explore more of what this festival has to offer. I'm given a towel with which to dry myself and go commando for the rest of the day. 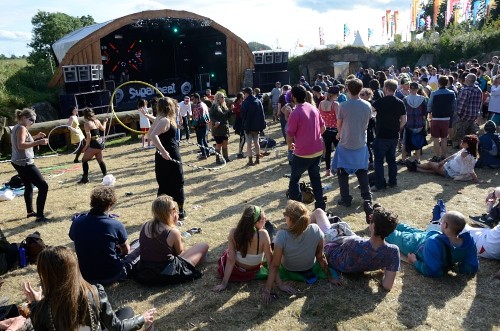 It's time to head to Pratty's Ring. This impressive amphitheatre, made from mounds of earth, hosts a lovely line up of dance based music. Sound bounces around this ellipsis and, as Saturday's sun begins to drop, we take in the delicious highs of the the collective on stage (I believe it's the The Jenova Collective). Tons of smiles from those gathered, all realising that we'll never live this moment again. Later in the evening, the Utah Saints take to the DJ booth here but I'm elsewhere. I'm not sure I can remember where.

There's a freedom of attitude about Beat-Herder and I'm sure that encourages the friendliness between punters. You can carry your own beer around the site as long as you don't stock up too excessively. It's easier to get through airport customs than it is to get a can of beer into many festival arenas these days but Beat-Herder bucks this trend. I'm sure, as a result, people are happier to spend their buck in the many bars around site once their own allocation has run out. Who wouldn't want to indulge in an ale or cider from one of the many bars, especially when you can get pints of the delicious detention and headteacher at £3 and £3.50 a pint? 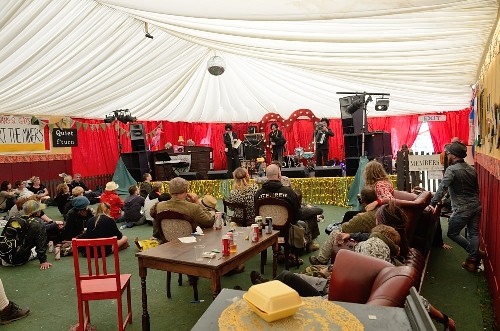 Perhaps still my favourite place to drink, when not at the main stage, is the Beat-Herder and district Working Men's Social Club. Here the entertainment is distinctly retro-Northern. If you're not taken by the act on stage, you can amuse yourself by looking at the art and signs that adorn the walls of this tent. It's the space of Flying ducks, Hilda Odgen, Nora Batty and shillings and pence. We're disappointed to miss Mercury, the Queen tribute act on Saturday night (I was elsewhere) but delight in Squinty McGuinty's Comedy Cabaret on Sunday afternoon. We play dog-poo bingo, singalong to rude songs laden with double entendre and laugh ourselves silly as The Chestikov Brothers introduce us to Gary, the amazing psychic goat boy. "If only Saturday evening TV was like this", I mutter to Photographer Phil. "I'd never go out at weekends".

It's a pretty compact site at Beat-Herder. They pack a lot of entertainment into a concise space, the result being that I don't seem to watch a complete set of any act over the weekend. We mark out some space to the left (or was it to the right?) of the main stage sound booth and return there once our wandering is done. Many punters probably don't venture far from their rugs and who can blame them when the quality of line up is so strong. Sunday's schedule is a classic. By The Rivers take a lunchtime slot; crowds are sparse with many not awake or aware of these gentle Reggae delights. We do spot a few Leicester City football tops being fervently waved though. As you'd expect in these parts, The Lancashire Hotpots pack the field out and get us all to sing along in praise of fried food and alcohol. Mr Benn, Crazy P, Dreadzone, Levellers and Leftfield complete the rest of the Sunday bill. Many suggest that, if they had to pick a fantasy-festival line up of bands currently playing the circuit, this mightn't be far from what they'd pick. 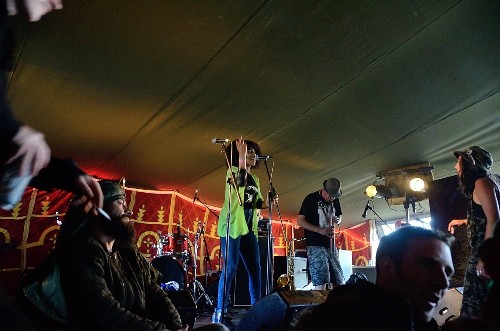 It's during the gap between Crazy P and Dreadzone that Photographer Phil and I get chatting to the delightfully named Prudence Pineapple. She's off up to the Smoky Tentacles Shisha Lounge to see Mr Woodnote, & Eva Lazarus do their thing. We'd been impressed by their contribution to Mr Benn's set earlier that day so tag along to this tent where you can (surprisingly given the name) smoke Shisha and drink tea in mugs. Prudence's recommendation is a good one. In this small(ish) tent, Eva makes an almighty, soulful impression and we leave happy. It's been a good day for acts that preface their name with Mr. Earlier, in the afternoon, Mr Scruff was hitting a sweet spot up in the Toil Trees with a typically mammoth four hour long set, complete with his trademark drawings.

Beat-Herder is the sort of festival where you want to be in fifteen places at once. It's also the sort of festival that everybody needs to experience at least once. This year I hardly managed to venture into Maison D'Etre, the tent that specialises in up and coming indie acts. I caught a bit of the indietronica Mt. Wolf in there but remain disappointed for missing Palace, and Blaenavonamongst others. I didn't even poke my nose around the door of the Stumblefunk tent or the Bushrocker Hi Fi (where ragga and dub reggae is the order of the day). It's surely not a legitimate grumble that there is too much going on.

Sunday evening and I look skyward from the main stage glow of Leftfield. This is Beat-Herder's tenth year and to celebrate the success, the most glorious of firework displays is lighting up the night sky. I look around the crowd that are also looking skyward; people are chattering, smiling, laughing and wide-eyed. This has been an exceptional, exuberant, exquisite enterprise to the end; it'd take an extreme effort not to enjoy its essential elements. The tenth Beat-Herder, the 'e' year - ecstatic entertainment for everyone. 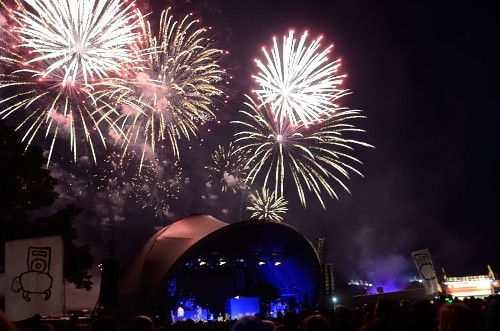