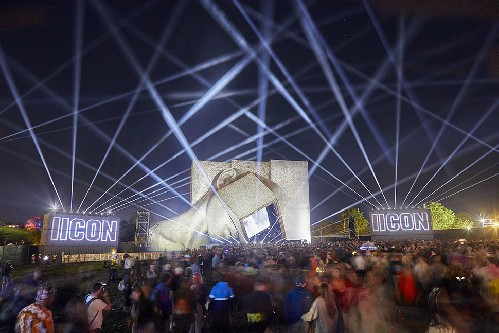 The organisers of Block9 are delighted to announce their return to Glastonbury Festival in 2022 - fifteen years since the launch of the NYC Downlow. This year sees the creative duo return to their spiritual home in Somerset with two spectacular fields - Block9 East and Block9 West – with some amazing talent including Todd Edwards, Honey Dijon, Floorplan, Justin Strauss (Just Rite), Steffi, LSDXOXO, a celebration of free parties, and a Glastonbury first. It’s going to be big!

Featuring the world’s first 100% green electric carnival float, the collab will co-present carnival processions across the festival site, with dancers, Moko Jumbies and masqueraders. The float will feature a sound system with fresh Caribbean sounds from Notting Hill’s finest selectors and DJs, with post-procession cooldown sessions at the Block9 East home base with eight times winner of the international Panorama steel band championships, the Mangrove Steelband.

Block9 West sees the most highly anticipated comeback of 2022 with queer nightlife institution NYC Downlow plus its backroom counterpart Meat Rack. And for one year only, Genosys Soundsystem will pay respect to the legacy of free parties, DIY rave counterculture and music as a form of political protest, 30 years after the infamous Castlemorton. 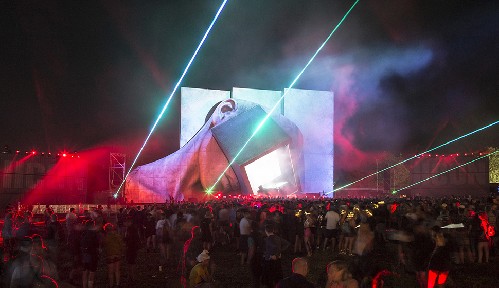 Next door, Block9 East hosts IICON - the epic monument to our digital, post-truth age, and that brand new collaboration with Notting Hill Carnival.

After it’s debut at the last Festival in 2019, IICON, the immersive audio-visual arena in Block9 East returns. Taking the form of a colossal, anonymised head, IICON is a pseudo-religious monument to the terrifying new realities emerging in our digital, post-truth age. This immense sculptural artwork is animated by state-of-the-art video mapping, delivering a vision of future music from the cutting-edge of today’s underground.

IICON AV:3D
Every night at IICON, Block9 present AV:3D - an audio/visual translation of Olivier Messiaen’s masterpiece “Quartet for The End of Time”. The themes and narratives of the original work, which was created and debuted in a POW camp during WWII, provide inspiration for this immersive examination of life lived in the digital panopticon.

Genosys Soundsystem
The Genosys outdoor arena was created to explore the birth of electronic dance music and its lasting legacy. New for 2022, and for one year only, GENOSYS SOUNDSYSTEM celebrates the vital role of music as a form of political protest and marks the 30th anniversary of Castlemorton.

As the biggest illegal rave ever held in the UK, Castlemorton resulted in the passing of the original Criminal Justice and Public Order Act, limiting the power of people to protest against government policy. Today, that power is further eroded with the new Police and Crime Act which effectively bans music from peaceful protests altogether.

Gideon Berger, Block9 co-founder alongside Stephen Gallagher, says: “This year, Block9 is paying homage to the philosophy and spirit of Castlemorton. Thirty years on, we continue to fight for the utopian dream Castlemorton represented. A dream of music, community, and progressive inclusivity free from state control and corporate profiteering. Block9 is a direct descendant of the Castlemorton epoch and retains direct links to the people, DJs and crews behind the era defining rave itself. Today, Block9 provides a festival platform for a new generation of artists and DJ’s upholding the very same political principles at the core of dance music both in 1992 and 2022.”

Broadcasting from a massive sound system and a vintage coach, Genosys Soundsystem fuses the spirit of stripped-back, old-school rave with a line-up of top-tier electronic talent.

Genosys Soundsystem highlights will include:

South London techno heroine OK Williams makes her Block9 debut. Genosys - are you ready?
Berghain’s latest resident, Turkish-born Sedef Adasi, brings her unique, genre-busting, musical style.
Block9 veteran and infamous House purist Brawther plays live for the first time with us. Expect classic French mastery of the genre with unflinchingly accomplished production.
Co-founder of queer nightlife collective MARICAS, Barcelona’s ISAbella joins to tear up the dancefloor in her inimitable way.
Following a legendary performance on IICON in 2019, and with his brand new album freshly dropped, James Connolly returns to Bock9 in 2022 as Dance System.
Berlin record store and label owner Cinthie - widely respected across the globe for both her crystal-clean productions and her highly discerning ear - gets behind the decks for a long-awaited Block9 debut. 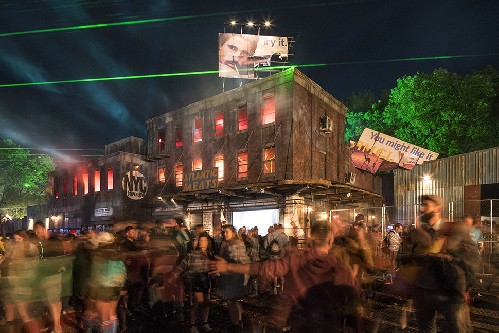 NYC Downlow
Block9 West welcomes you back to its pièce de résistance, the NYC Downlow. A multi-roomed temporary club space housed inside a life-size, film set replica of a seedy New York bathhouse-cum-meatpacking warehouse circa 1982.

Resident Advisor calls The NYC Downlow “categorically one of the best clubs in the world”...but don’t just take it from them. Take it from the motley crew of sexed-up go-go-boy butchers and gender-bending, drag-army of dancers and performers, who will be hosting DJ’s from across the international queer underground.

NYC Downlow musical highlights will include:

Fifteen years after his music was played at the first ever NYC Downlow in 2007, Todd Edwards, the Godfather of UK Garage, New Jersey’s most celebrated export finally comes home to roost. The Downlow children will be waiting with open arms to welcome him into The NYC Downlow family.
Honey Dijon returns to the Somerset sweatbox to bring authentic New York City realness.
Soul Summit Music (NYC), Brooklyn’s free community House sound system, keeping New York’s original House music community alive and kicking.
Rave royalty, Grace, of original free party sound system, DiY, returns to her residency at the NYCDL to educate and represent real House music in its purest form.
Justin Strauss is one of the most sought-after producers on the planet. His work with Tina Turner, Beyonce, Luther Vandross, Depeche Mode, Jimmy Cliff, B-52s, Sergio Mendez speaks for itself.
Steve Fabus,’ DJ career predates the birth of House music itself. His legendary residencies throughout the 1970’s and 1980’s in both New York & San Francisco make Steve one of the most honoured guests Block9 has ever invited to play.
The Carry Nation, current reigning queens of New York City, pay a flying visit before returning to the Big Apple to host citywide Pride celebrations.
Berlin’s Virginia remains one of Germany’s most celebrated talents. Her knowledge of House is second to none. Be prepared for her to slay!
Original House legend DJ Paulette has held some heavyweight residencies during the golden age of dance music in the UK. Initially at Manchester’s Hacienda from 1992 until 1995 and then at London’s Heaven and Ministry of Sound from 1996 till 2000. 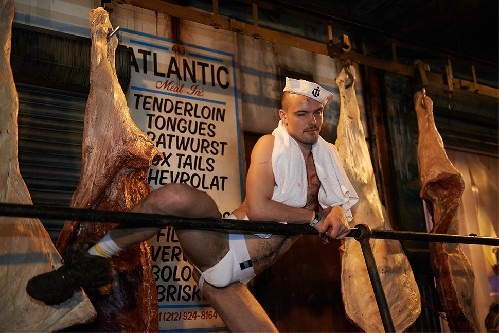 The Meat Rack
Hidden at the back of the NYC Downlow you will find The Meat Rack. Hot, dark and sweaty, The Meat Rack features the ultimate sleazy homo-centric line-up. Get ready to rub shoulders with talent such as:

NYC Downlow performance highlights will include:

Returning to The NYC Downlow this year is the force majeur that is MAUDE ADAMS AND ALL THOSE CHILDREN: the East London performance troupe, featuring Drag Queens and  Kings, Gogo Boys and Butchers, led by JONNY WOO. Themes this year are:
THURSDAY NIGHT: KINK Get ready for a super sexy opening night of kinky looks and sexy couture. Strut and shake in leather, rubber, harnesses, corsets, jocks, panties, body skimming city wear and equestrian couture.
FRIDAY NIGHT: THE LOVE BALL Taking inspiration from Suzanne Bartsch's legendary NYC event and New York’s Ball scene created by the queer black, Latino / Latina / Latinx communities of the city. LOVE IS LOVE!
SATURDAY NIGHT: CLUB TROPICANA It's time to dress for the pool with swimsuits, bikinis, speedos, thongs and strappy bits of nothing. This is a summer night - dress (in)appropriately.
SUNDAY NIGHT: Vegas Sunday is the closing night party following Diana Ross on The Pyramid Stage. Go BIG then come home with the VEGAS EXTRAVAGANZA! Big looks and big hair worn by the biggest names.

Whatever you do, do it BIG! 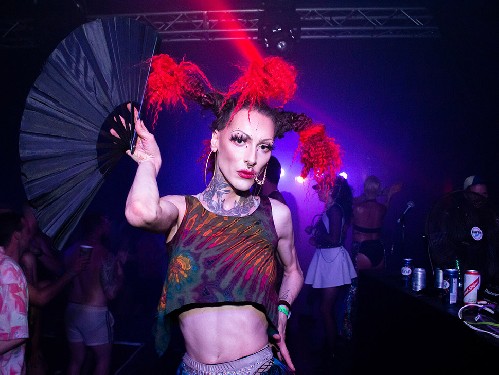 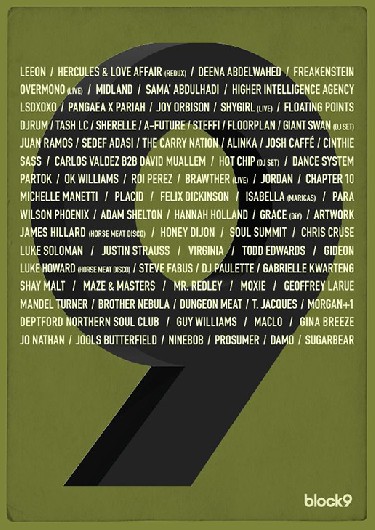 She Drew The Gun - Behave Myself (Official Music Video)
video of the day
last updated: Today, 12:00am

Midnight in Peckham · Chaos In the CBD
video of the day
last updated: Yesterday, 12:00am