The Stonehenge Festival campaign has launched a CD to raise funds for the right to host a FREE festival near the sacred site.

The CD titled 'Stonehenge - A Celebration' will be released to commemorate the 30th anniversary of the Stonehenge free festival, and features live music from the festival recorded during the 1980's as well as studio tracks from Spiral Tribe, Hawklords, Headjam, Radical Dance Faction (RDF), The Majestic, and Black Star Dub Collective. The double CD also includes free festival artists such as Nik Turner, Here & Now, and Culture Shock.

All artists featured donated their music free of charge to support the campaign.

Formed in Aug 2011, supporters of the campaign include Travellers Aid Trust, professor of archaeology Sir Barry Cunliffe, and the Council of British Druid Orders.

Started in 1974, the last free festival was held in 1984 and saw 64,000 celebrating the summer, however following that event English courts banned the Free Festival from being held at Stonehenge.

1985 saw some of the regular attendees attempt to return and the ensuing confrontation with police ended in the Battle of the Beanfield, and no free festival has been held at Stonehenge since.

Since 1999 around 20,000 people have been able to attend Stonehenge each year to celebrate the summer solstice sunrise but no amplified music is allowed. Van loads of police are present in the area in case of any trouble, but generally a jovial mood prevails. Few arrests have been made in previous years, mostly in relation to minor drug offences.

The Stonehenge Festival campaigners are currently negotiating with site owners English Heritage, the various authorities and private landowners in order to re-establish a summer solstice celebration at the site.

Sid Hope campaign founder said, "For many years people from all parts of society would gather and commune at Stonehenge to mark the summer solstice in step with our ancestors.

"Following the festival’s ban in 1985 they no longer have that opportunity. We are campaigning for a festival site near Stonehenge that would benefit Stonehenge and those who revere it as sacred, along with those who wish to celebrate solstice.

"At present our negotiations have located and earmarked a festival site 20 miles away – unfortunately a considerable distance away from Stonehenge. We continue to campaign to celebrate the Solstice closer to the sacred stones. We hope this CD will help raise funds for our campaign , to give people the chance to experience solstice nearer these sacred stones."

Here is Stonehenge back in 1984, with eFestivals in attendance. 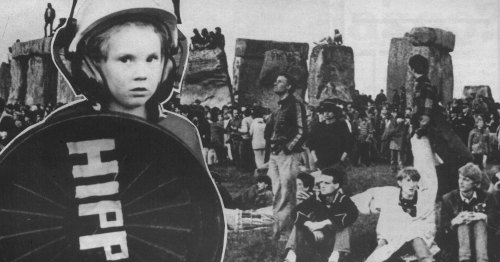 going to the Solstice at Stonehenge? Why not go green?
small bags only
last updated: Tue 12th Jun 2018