We believe the key to a successful and trouble free festival revolves around a certain amount of preparation and a lot of beer. We're sure that there are a few other factors but we can't think of them right now. So here goes...Â. our guide to ensuring that you have a ripsnorter of a festival.

Packing - you'll be glad to know that the best advice is to take as little as possible (that's stuff in your backpack by the way - you can take as much as you like once you're there). This will help maximise the opportunity for carrying the most essential item of all -. beer.

Before tackling the important subject of beer, a couple of general points. Unless you are very lucky you will have a longer walk to your campsite than Hannibal, but without the benefit of elephants, and you should plan to make only one trip with your gear. Now - top tip - unless it is unavoidable, it is best to arrange to meet up with any female members of your posse at the site itself - otherwise you will inevitably end up as their mule. You will not believe how much crap they are capable of taking - we have carted washing-up bowls, tea cloths, even pillows and other alien paraphernalia before - you have been warned! Not to mention the fact that the ladies cannot pack things into a transportable state if their lives depended on it. 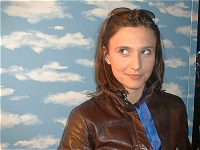 So how much beer should you take? Simple answer is as much as you can carry. In our experience a slab of Stella each is about right and should see you through at least the first 24 hours. Be warned, you are not allowed to take any bottles in (they confiscate them at the gates and the chances of getting them back are about as likely as you getting a shag with Jayne Middlemiss on the last night). Bear in mind is that there will be plenty of tents selling beer (the prices are generally around London pub prices) and there are people selling (overpriced) cans everywhere but, having said that, the hassle of carrying beer in will be amply rewarded by having a stash in your camp site.

Clothing - Unless there's been a heat wave for the preceding two weeks, there is a high chance of mud. Our advice, wear boots and then you are covered. One complete change of clothing is advised and don't forget that at the end of the day it is likely to be cold. Don't bank on the weather forecast and make sure that you have a waterproof top. Basically, expect to be covered in beer, mud, lentil stew or something at some point.

Things not to take

Washing - Yeah right! We've heard the rumours about shower facilities. We have a friend who queued for hours in the belief that they were communal but was sorely disappointed (even if that were the case it would have to be Jayne Middlemiss in there for the hassle to be worthwhile). Bottom line, pack a toothbrush and have a splash under one of the taps if you really need to. Deodorant is probably a good idea too.

Loos - So they stink... no problem. Just take a peg for your nose and NEVER look down!

Sex - Yeah right! Our advice is go for it on the first day... after that forget it, you'll be stinking like a pig (see above) and whilst it won't bother you, the girls won't be feeling too fragrant either.

Have a good one!