Ahh... pockets.  I love pockets.  Its a shame most clothes designers for women don't agree, or if they do give you some, they are a fecking useless size.  Bring on the day sack! Saw this debate w 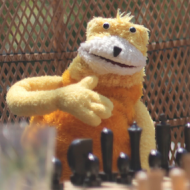 There's a moment at festivals where at the start of the day someone in the group picks up their bag for the day.  Another group member who doesn't want to take a bag spots this, looks at the bag, then