By stuie,
April 5 in Chat

Bagged an oxfam place last night!! Checked the page just before I went to sleep at about midnight and there it was! So chuffed. 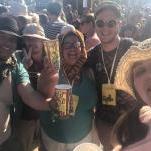 Wow that was the most intense 1 minute of my life. After failure at main ticket day and resale day I can at last say I’m going to Glastonbury 2022 🙏🏻😊.