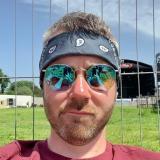 On this day 2019 (the Monday of Glastonbury week, not the actual date) Missed out on tickets in the main sale, then missed out on the resale as well. Absolutely gutting few months in the build up

21/06/17 -  I woke up this morning fully packed but completely ticketless.  I hadn't been able to get into any volunteering gigs, no secret sales and the very obvious scam workers ticket I paid £40 tu

So you’re basically saying you get to Stay Another Day?