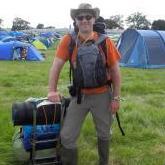 Not sure if anyone else has seen it but here is a link to the Stage Times: Set Times, Set Times, get yerr lovely set times 'ere!

Went to see some music and danced badly.

On site now.  The weather is fine and the ground is firm but easily takes a tent peg.  It's going to be a good weekend.