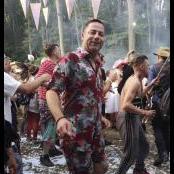 We were ultimately able to come to Worthy Pastures last weekend from France. We had an amazing time with the family, and we really enjoyed every second of our stay. Very happy to have been able t

What a beautiful night