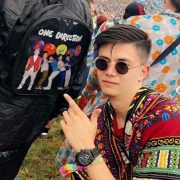 By Andrew_Ntu,
March 8 in Chat

I thought about trying to design an all-weather festival trolley some time ago. The worst problem to overcome is always the mud. There are many varieties of mud to deal with that frequent Glastonbur

Yoghurt on a Stick

Hello Andrew, Hopefully you'll get more of a response here. However it is late on a Sunday, so be patient. My own views are that I like the collapsible element. Personally I would go for pne