The Other and "Kind of Pyramid Level" Headliners

To me it sounds like Foals, The 1975 - not really Biffy Clyro because it sounds like they haven’t been asked. I’m thinking the 1975 because I reckon if it came between headlining other and not pl 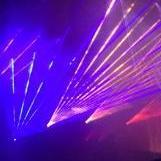 Don’t get me wrong - I get what you’re trying to say, but I think we need to walk before we can run. Getting “female” bands on then Glastonbury bill also acts as an incentive for more to get in the st

Since it's all about diversity now, I think Billie Eilish should not be counted in the female category since all her stuff was written and produced by her big brother in his bedroom.