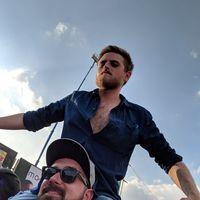 I made some comments on here a few weeks ago about how if Download 2021 is going to largely be 2020's lineup, 2022 is the year that they should really start to look towards the future and give lots of