I know that for an act of their age and stature, it's a bit soon for return to the farm - after all, it was 17 years between appearances last time, but they seem to be going through a massive creative

Never stopped listening to them, one of my favorite acts. Saw them at Sonar this Summer and will be seeing them in Amsterdam later this month. Rick and Karl are still at the very top of their game. Th 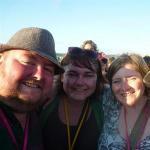 Amsterdam for me too and cannot bloody wait!