Each day they are only having bands on the pyramid who have a number in their name.  When the numbers are all added up they will equal 50. Friday looks ok with U2, Maroon 5, the Jackson 5, nine i 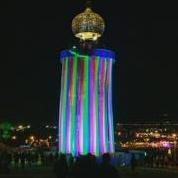 They will have a message on the big screens at the end of the Sunday night saying ‘Thank you for making the last 50 years so special. We hope you travel safely and see you next year. Michael and Emily