One of the best aspects of this festival is the vibe. Very chilled and friendly. An audience who knows and likes music. Plenty of music choice. Broad age group (3 generations of hippies &amp

Big high five to everyone who helped put the video together. I really enjoyed that. it did have the bearded feel to it and helped with thie awful feeling i've had over the last few days knowing i 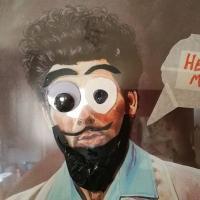 I have to also give them kudos. I'm sure other events will have their own contingency, but the way BT communicate their plans to punters should be a blue print for ALL festivals. Bravo.