Those extolling the virtues of secret shows would do well to remember that Friday at the Other Stage, 2014; when a fevered crowds expectations were audibly quashed with a drop of a curtain reading the

@mr flow is pulling double duty and returning after his sterling job in 2017. Although everyone who ran it in the past still helps out with the thread. 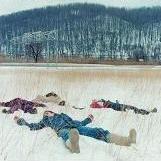 I reckon Blur.   Albarn already there and Blur popped up with a secret gig in London earlier this year.