The Friday night is to be headlined by Feeder, while the Saturday is headlined by Amy Macdonald. Also playing are The Wailers, Candi Staton, Levellers, The Divine Comedy, and more. More will be announced over the coming months.

For the full line-up details as available, click here.

Tickets have sold out, an adult weekend tickets priced at £85, which includes parking and camping. Campervans & caravans cost £25 extra. Children aged 12 and under are able to attend for free.

The Literature Stage in a Bedouin tent near the Co-operative Verb Garden has journalist and author Mary Miers interviewing, amongst others: children's author and novelist, Janis Mackay from Caithness; former MP & MSP Denis Canavan who has recently published his autobiography; Kit Fraser, writer of 'Toff Down Pit', 'Joy or Talk', owner of Hootananny's pub in Inverness and quixotic politician; Roger Hutchinson, writer of 'Calum's Road' and many other books; Iain Thomson, writer of 'Isolation Shepherd'; Peter Mackay whose study of Sorley MacLean comes out later this year; Maxwell MacLeod, who is writing about his recent journey rowing around the Western Isles; Tom Morton, Scotland radio DJ and writer; and Dave Patrick, writer on Sir Arthur Conon Doyle and the dawn of the New Age movement. Also in this tent,Twit Lit, a short story to the length of the 140 characters it takes to make up a Twitter Message (prize tickets for winner), organised by Moniack Mhor Writer's Centre.

The charity this year is Spirit Aid, the brainchild of well known Scottish actor/director David Hayman who will make an appeal on behalf of the charity from the main stage at 1830 on Friday. 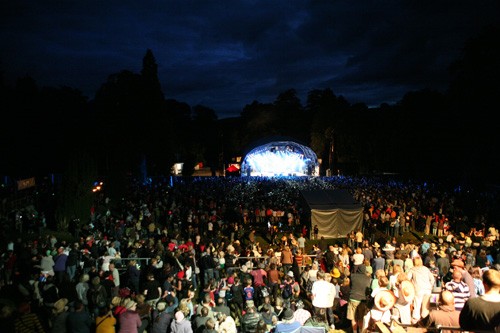