A three day family friendly music festival with full camping facilities offering festival goers over 100 acts with an eclectic mix of live bands of all styles and genres over six stages, and high calibre comedy in the eFestivals Comedy Tent. The dates for the ninth Summer Sundae Weekender held at De Montfort Hall, Leicester are confirmed as Friday 14th to Sunday 16th August.

The festival now in its ninth year showcases emerging talent along with well known established acts, as well as bluegrass, folk, electronica, theatre, and entertainment all set over six stages. The event offers a civilised and relaxed atmosphere, an unwavering ethical standpoint, high production values, a quality range of foods from around the world, 20 cask ales and a mean line in cocktails (all reasonably priced) at four bars throughout the site, not to mention stalls, and high calibre comedy in the eFestivals Comedy Tent.

The festival will this year include some new additions including 'The Garden' for families attending the event which will be hosted by a giant scarecrow, the area is designed to be kid friendly, with giant board games, music workshops and fun science experiments. There will also be a Silent Disco held from 9pm each night, and 'The Phoenix Square cinema tent' will run nightly between 8pm and 1am.

There will also be a debut visit by Inertia flat landing bike displays showcasing bike tricks where the wheels never leaving the ground.

For children there's the bespoke Kidzone with an outer space theme this year.

The Phoenix Square Film Tent will showcase films including ANVIL: The Story of Anvil, The Rocky Horror Picture Show and This is Spinal Tap. Summer Sundae Weekender also has the UK music festival exclusive of All Tomorrow's Parties (WARP FILMS) documentary.

Getting There
By Car: De Montfort Hall is situated at the top of Regent Road on the edge of Victoria Park. Located just one mile south of Leicesters city centre, the Hall is well signposted on the inner ring road. If using the M1 come off at Junction 21 and follow the signs for the outer ring road (Leicester South and East), turning left along the A50 or A6 when signposted. Parking is available on the edge of Victoria Park.
By Train: Leicester's train station is on the Intercity Midland Mainline, just over an hour from London. The station is on London Road (A6) and is only a 10 minute walk away from the Hall. To book tickets online click here.
By Bus: bus enquiries please call 0870 608 2608
By Bike: Throughout the weekend Sustrans staff will be on hand to provide information on local routes and giving away cyclometers to every attendee that arrives by bike. Ride Leicester  Mobile Bike Park' will provide a fully monitored, secure place to leave your bike.
By car: If you have to go by car remember eFestivals has a car share scheme click here to find out more.

Summer Sundae Weekender has always been pro-active about environmental issues and redeems itself year on year. Last year all power was drawn directly from Leicester City Councils eco-tariff power supply - thereby offsetting some emissions. The festival also endeavours to turn off equipment whenever it's not in use. Overall, the festival's carbon footprint in 2008 was merely 474.5 tonnes, with 67% due to audience travel. 350 energy saving lightbulbs were given away, thereby offsetting nearly 44 tonnes of CO2 emissions, with the target this year being 424.5 tonnes, which will be achieved through customer awareness to the need to arrive by public transport, by giving away more light bulbs and by recycling more. 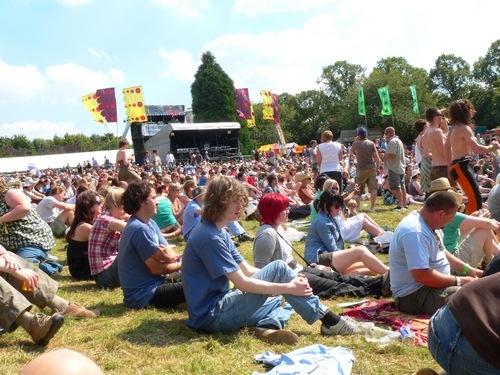