Bringing the people of Cambridge over ten hours of live music, film, arts and crafts on Midsummer Common. Strawberry Fair has become an integral part of the festival calendar over the last 40 years, and is set on a lovely site (strictly no camping though!) by the river in the centre of Cambridge. In 2015 the FREE event will take place on Saturday 6th June.

This year's Fair is going under the banner Strawberry Fair: Down By The River. Central to the fair is the Village Green, featuring an open air arena with a range of displays reminiscent of community celebrations from a by-gone age (but all done in a Strawberry style). The Village Green will kick off by welcoming the Strawberry parade back from its tour of the town.

The Strawberry Fair Cambridge Band Competition is open for local unsigned musicians from all local towns and villages within 30 miles of Midsummer Common. At the competition heats, to be held throughout the month of March, bands and solo artists will battle it out live in front of an audience of industry professionals and music-lovers.

Entries are open to bands, soloists and duos of all genres - from urban to folk, from opera to indie and everything in between as long as all material is the performers' own original composition. Details of how to enter and the entry form are at www.strawberry-fair.org.uk. Only electronic entries will be accepted. All entries must be in by by 5.30 pm Friday 23rd January 2015.

The demos will be heard by a listening panel who will select those acts to go forward to the heats in March and announce them on Monday 26th January.

The events has an area for kids, a Green area and the Wigwam Stage. The Acoustic Bar will feature comedy, cabaret, folk and acoustic performances. The 'Steam Punk Town' music area is expected to return, and the central Village Green, open air arena offering a range of performances and displays, and of course, the obligatory beer tents with AUTHENTIC LOCAL ALE. 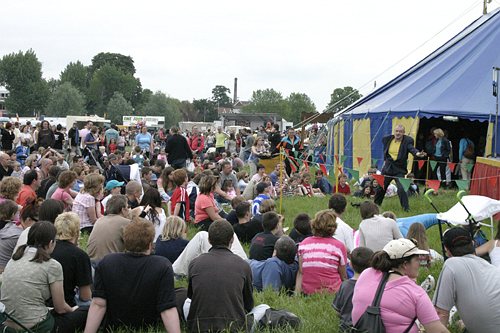